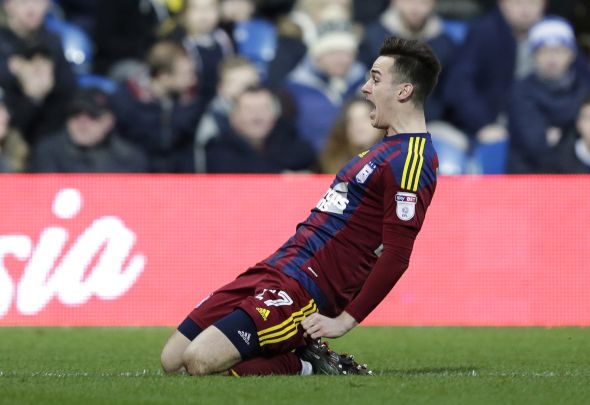 Leeds are interested in Leicester City attacker Tom Lawrence, according to a reliable journalist.

BBC Radio Yorkshire journalist Joe Rawson revealed on his personal Twitter account that the Whites are interested in the 23-year-old and face competition from Sunderland for his signature.

Lawrence is currently on a season-long loan at Ipswich, but it is understood that reigning Premier League champions Leicester are prepared to recall the Wales international.

Rawson also revealed that Leeds have identified attacking pair Ashley Fletcher and Sergi Canos as their priorities to sign in the remainder of the January window.

The broadcaster and journalist revealed that the Fletcher deal “looks the most likely” to be completed and it would be a loan move.

Sky Sports reported on transfer centre blog (Friday, 4:49pm) that Leeds were in the race to sign Grimsby striker Omar Bodlge, but it appears their focus remains elsewhere.

Leeds have highlighted Lawrence as a potential January signing and he has impressed with Ipswich this season.

The attacker, who plays as either a winger or a secondary striker, has been a standout performer in an Ipswich side that are languishing in mid-table in the Championship.

He has made 23 appearances across all competitions this season, scoring seven goals and supplying five assists.

Lawrence is also a member of the Welsh team and featured in the nation’s last match against Serbia in a World Cup qualifier.

Leeds clearly are looking to strengthen their attacking options in January and Garry Monk has identified a potential weakness in the side. The Whites are lacking options in attack and would be in serious trouble if top scorer Chris Wood picked up an injury. Fletcher and Canos would certainly be good additions if they could get them over the line, but Lawrence is the standout performer out of the trio this season. The 23-year-old has looked in great form this campaign and has looked extremely impressive in front of goal in the Championship. Leicester could be open to the possibility of Lawrence moving to Elland Road, where he would experience a promotion fight instead of mid-table at Ipswich. The former Manchester United youngster certainly has the quality and would help add some extra competition in Monk’s squad.

In other Leeds transfer news, Alex Mowatt had a message for the club’s supporters after his exit.