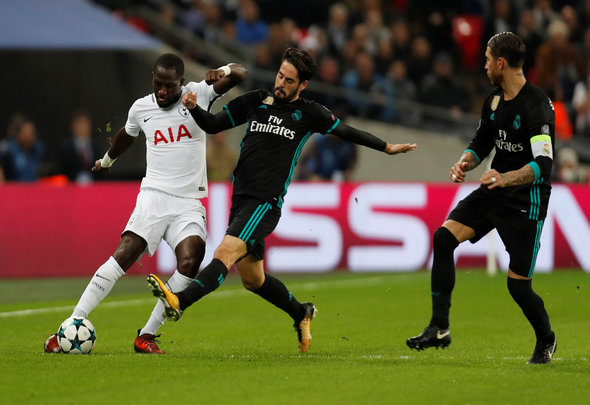 Tottenham fans were left fuming on social media over the performance of midfielder Moussa Sissoko in the club’s impressive win over Real Madrid on Wednesday.

A brace from Dele Alli, making his first European appearance of the season having sat out the opening three games through suspension, and a goal from Christian Eriksen saw Spurs run out 3-1 winners over the current Champions League holders.

It was the club’s first win over Real Madrid in their history and the three points secured the Lilywhites a place in the knock out stages of Europe’s premier club competition.

There were several mightily impressive performances on display from Mauricio Pochettino’s men at Wembley, with fans raving over the performance of Harry Winks, but one man who did not escape criticism was French international Sissoko.

The Tottenham faithful turned to Twitter to blast the midfielder’s performance, with many surprised Spurs managed to win with him on the pitch.

All excellent,the only lemon was Sissoko,we beat Real with 10men!

Sissoko is still a proper can but he’s OUR can, and I love him for it. #COYS

Imagine what the score would have been if we had played with 11! #COYS #Sissoko #TOTRMA #easyeasyeasy

We best Real Madrid 3-1 with Sissoko playing for majority of game! 😳 #COYS

Anyone close to Poch should please tell him next time he thinks of bringing on Sissoko we want Son instead. ☹️

In hindsight the most amazing thing about tonight was winning with Sissoko on the pitch for an hour! #awfulperformance

Beating Madrid despite having Sissoko ambling around the pitch falling over his own feet. Magic man indeed

Sissoko and Llorente should be sent far away from this Spurs team.

Sissoko came on as a substitute to replace the injured Toby Alderweireld after just 24 minutes to continue his impressive record of appearing in every one of the club’s 15 matches across all competitions this season, with only Eric Dier joining him as such a regular under Pochettino.

Of those 15 outings nine have come in the starting XI, and it awaits to be seen whether he will be included in the first team line up when Spurs welcome Crystal Palace to Wembley on Sunday.

In other Tottenham news, Frank Lampard has described one of Sissoko’s team mates as one of the best in the world.