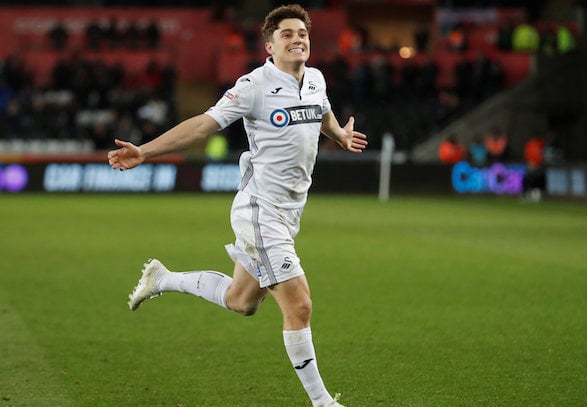 Daniel James is poised to undergo a Manchester United medical as he prepares to complete a transfer from Swansea City, Football Insider understands.

The winger, 21, is set to become United’s first summer signing after agreeing personal terms with the club and the structure of a deal set to be worth around £15million.

A United source told Football Insider that James is expected to complete a medical in the next week as he prepares to link up with the Wales squad at their Algarve training camp as they prepare for their June Euro 2020 qualifiers against Croatia and Hungary.

Football Insider revealed two weeks ago the Premier League giants were in advanced talks to land the in-demand winger in a £15million transfer ahead of the likes of Everton, Bournemouth, Newcastle United and Leeds United.

Football Insider pundit Danny Mills hailed James as a “frightening talent” but warned him last week to make a late U-turn and instead join a  club where he would get more game time next season. United have made a formal move for James as they take advantage of his situation at Championship club Swansea, where his contract expires in the summer of 2020.

Talks over an extension broke down in the Spring and the rising star’s immense progress in recent months alerted scouts from multiple Premier League clubs.

James scored his first international goal for Wales in March and ended the campaign in superb form for Swansea, with his 36 appearances yielding five goals and 10 assists.

In other Man United news, it can be REVEALED that Ed Woodward is working on a deal to beat Manchester City to the signing of a brilliant central midfielder.