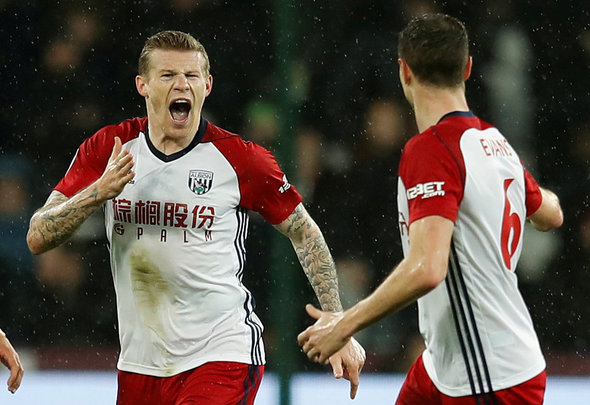 West Brom manager Alan Pardew has confirmed that James McClean will remain at the Hawthorns until the end of the season even though the winger has revealed he would like to move to Celtic in the future.
In December, the Republic of Ireland international stunningly revealed that he would “give anything” to move to Parkhead one day, leading to speculation surrounding his future at the Baggies.
BetVictor have made Celtic joint-favourites to sign him this month while the Telegraph has also reported that the 28-year-old is wanted by Burnley yet again after they saw an £8million rejected for him in the summer.
However Pardew has now confirmed that he has no plans to sell McClean this month and he fully expects him to remain as a West Brom player until the end of the season.
“We’ve had no bids,” said Pardew, as quoted by the Express and Star. “I don’t see me moving him on or him wanting to go. I don’t see that scenario.
“His performance level was high at West Ham, he got a good goal, although it was deflected, it was a hell of a run from the edge of our box.
“He’ll be an important player from now until the end of the season. He’s a character and I think that’s important for this team as well.”
McClean scored his first goal of the season with a brilliant strike from outside the box against West Ham earlier this week, but his performance levels across the campaign have left the West Brom fans concerned.
The Derry-born winger has made several mistakes that have led to goals with his most recent one coming when he turned his back in the wall to deflect an Alexis Sanchez free-kick past Ben Foster.
Pardew has used McClean more often than Tony Pulis did before the Welshman was sacked by Albion.
He has made just two Premier League starts under Pulis this season, but since Pardew has come in the ex-Sunderland flyer has made four starts.
In other Celtic news, Hoops fans have trolled Rangers on Twitter as they move closer to signing this attacker from the Premier League.
We’ve launched a << BREAKING NEWS FEED>> exclusively for your club. ‘Like Us’ on Facebook by clicking here if you want 24/7 updates on all Celtic breaking news.