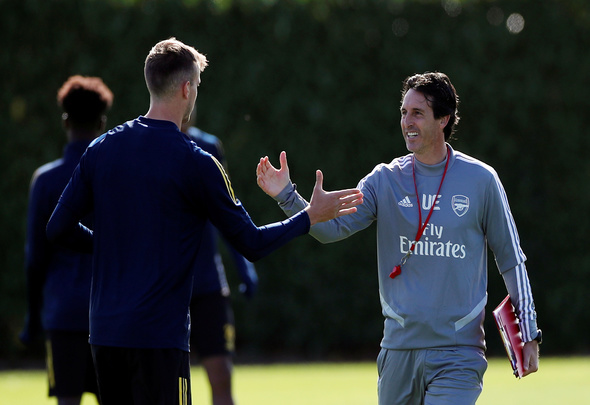 Darren Bent says that Kieran Tierney should “100 per cent” be the first-choice left-back at Arsenal ahead of Sead Kolasinac when fully fit.

Speaking exclusively to Football Insider assistant editor Russell Edge, the former Tottenham striker, who is a boyhood fan of the Lilywhites’ north London rivals, says that the Scottish international looks to offer much more down the left-hand side of the pitch than his Bosnian teammate.

Tierney joined the Gunners from Celtic over the summer but surgery on a double hernia and a hip problem kept him out of action for the opening weeks of the campaign, his return coming in the League Cup win over Nottingham Forest.

Having also started the Europa League win over Standard Liege, Bent says that there is no doubt Unai Emery should make the 22-year-old his first-choice in the battle with Kolasinac.

Bent told Football Insider: “Tierney all day long for me. Kolasinac might get into great positions but he’s got the worst final ball I think I’ve ever seen.

“Every time Kolasinac seems to get into the final third, he overhits it, underhits it, passes it back to the defenders, gives it to the goalkeeper, crosses when he should shoot. He always makes the wrong decision but he does so well getting into that final third position, it’s so frustrating.

“We saw Tierney in the week get into the position and more times than not pick the right option. Once he’s fully fit he’s going to win that battle all day long.”

Kolasinac has been a mainstay for the Gunners this season, starting all four of the club’s last Premier League games, as well as the first Europa League clash against Eintracht Frankfurt.

He has just one assist to his name across all competitions so far, with a total of 14 in 78 appearances for the Gunners.

In other Arsenal news, Football Insider can reveal that the Gunners have launched transfer missions for a powerhouse at their London rivals.