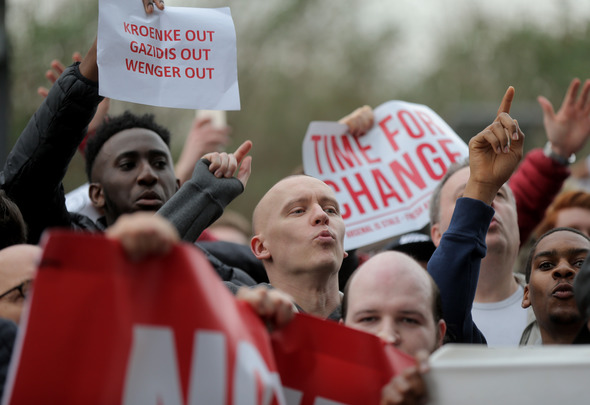 Arsenal fans expressed their disappointment and anger on social media after the Gunners suffered a disappointing 3-0 defeat to Chelsea in pre-season.

The Premier League champions got their pre-season underway as they faced the North London club on Saturday afternoon at the Beijing National Stadium.

Despite Arsene Wenger’s men being priorly involved in three pre-season friendlies, Chelsea looked the better team throughout the entire game and went away with the victory thanks to a brace from Michy Batshuayi and Willian.

Arsenal were second best throughout the 90 minutes and they only managed to register a single shot on target in the entire match.

Supporters from the red half of North London were quick to react on social media and express their concern ahead of the new Premier League season.

Brushed aside by Chelsea 3-0 miles behind in fitness and lacking quality. More additions needed. #AFC

Chelsea played very well, fair play to them but we were very poor #AFC #CFC

Shook. We lost 3-0. To Chelsea. In a pre-season friendly. Can't believe it. End of the world. Crisis at Arsenal.

Our fans have been laughing at Chelsea. They won epl, will play in the UCL & have reinforced well. AFC? Lacazette for Alexis.That's all.

Well that was waste of time, felt like AFC had no control & no midfield to do so,Chelsea played exceptional too.Only positive no injuries

Big difference between the teams. Chelsea trusting the pitch, taking shots, whereas we don’t want to shoot and fall over all the time #AFC 👀

Arsenal looked knackered to be honest, been a hard tour and a 4th game too far, Chelsea looked a lot fresher.
Ultimately not a big deal. 👍

The Gunners will have the chance to enact some revenge on their Premier League rivals as the two face other once again in the Community Shield at Wembley Stadium next month.

Before the tradition curtain raiser, Arsenal are set to travel back to London and prepare for the Emirates Cup which gets underway next weekend.

Arsenal finish their pre-season tour with a record of two victories and one loss.

Manager Arsene Wenger will be hopeful that his side can be fully prepared in time for the opening Premier League match of the season against Leicester City at the Emirates Stadium on 11 August.

In other Arsenal news, a Premier League side are plotting a swoop for this Gunners midfielder.