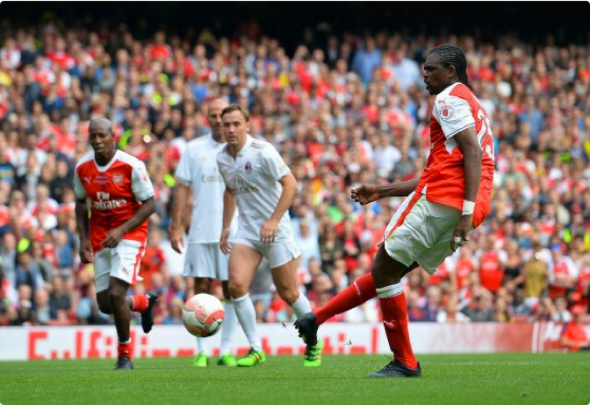 Leicester forward Ahmed Musa has revealed that he’s in regular contact with former Arsenal striker Nwankwo Kanu, describing him as a “role model.”

Musa, 23, completed a club-record £16.6million move to the Premier League champions in the summer.

He states that Kanu was like a hero in Nigeria and revealed how the former Premier League hitman played a part in him moving to England.

“I grew up as an Arsenal fan. All because of Nwankwo Kanu, he is like a role model for me,” said Musa to Arabic newspaper Asharq Al-Awsat.

“I got to know him when I started playing in the national team. He’s like a hero in Nigeria. We always have contact with each other and I spoke to him before I came to Leicester.”I was in Russia and he called me, because he always advises me what to do.

“He told me that I would enjoy it in the Premier League and England, that it was a nice place.”

Kanu joined Arsenal in 1999, where he spent five years and became a fan favourite at the club.

He recently played in a legends game for the Gunners and bagged a hat-trick during a 4-2 win against a legendary AC Milan team.

However, Musa hasn’t started life at the Foxes as he would have liked after his move.

Originally a starter, the former CSKA Moscow striker has dropped down to the bench and didn’t even feature in Leicester’s most recent 0-0 draw against Southampton.

He has made eight appearances for the club and is still searching for his first goal for the Premier League champions.

In other Arsenal news, the Gunners are interested in signing young striker Andre Silva from Porto.