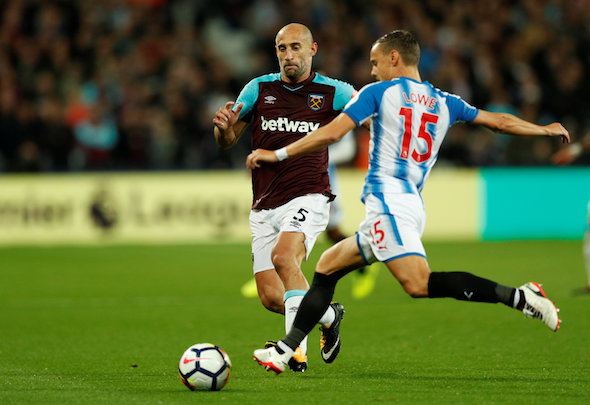 West Ham United defender Pablo Zabaleta has admitted the club are in danger of being relegated from the Premier League and has insisted the players must take responsibility for the recent results.

The Hammers were beaten 2-1 by Premier League leaders Manchester City at the Etihad Stadium on Sunday afternoon and now find themselves in 19th place in the league table.

David Moyes is still searching for his first win as Hammers boss, after he replaced Slaven Bilic last month, having lost three and drawn one of his four matches in charge.

However, Zabelta admitted that it is the players who should take responsibility for the recent results and not the manager.

“The situation at the moment is not what we expected at the beginning of the season. There are so many things we have to change if we want to be a Premier League team next season,” he told Sky Sports.

“As players we must take some responsibility. New manager, but the same mistakes that we’ve been doing for the whole season.

“It’s about confidence, winning one or maybe two games in a row and getting everything on track again.”

The Hammers are now without a win in their last eight Premier League matches and find themselves three points from safety in the relegation zone.

David Silva scored an 83rd-minute winner for City on Sunday afternoon to deny the Moyes’ side what would have been a well-deserved point.

West Ham took the lead moments before half-time through a Angelo Ogbonna header, but Nicolas Otamendi equalised for the home side on 57 minutes before Silva struck late on.

Hammers boss Moyes will be able to take some positives from his side’s performance but his player will be short of confidence heading in to two big matches against Chelsea and Arsenal.

In other West Ham news, this fringe player is hopeful of getting to prove himself in the Hammers first-team after impressive against City.