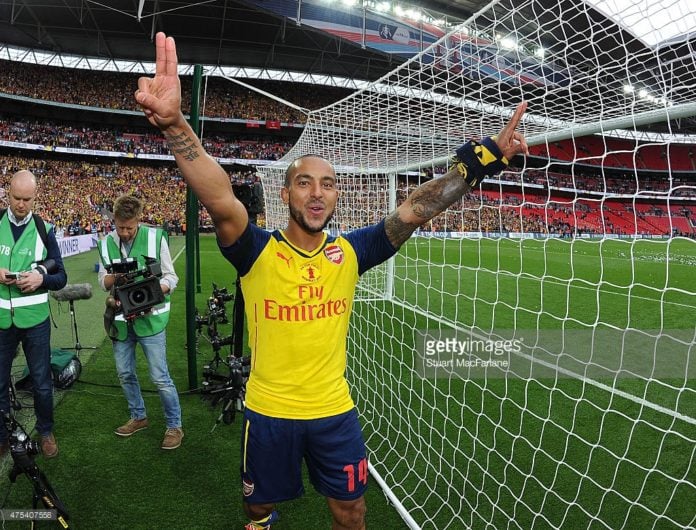 By Arsenal correspondent Tony Hughes
Arsenal will pay Theo Walcott £20.8million over the four years of his new contract with the club, Football Insider sources understand.

The Gunners will announce imminently that the England international, 26, has committed to a fresh deal that ties him to the club until he is 30.
Football Insider revealed at the end of last month that Walcott had agreed new terms and he has subsequently put pen to paper on a contract running until 2019.
It is understood that Walcott will be paid a basic salary of £100,000-a-week supplemented by performance-related bonuses. This is to replace his current deal, which had been due to expire in a year.
It will also extend the service of the club’s longest-serving player to well beyond a decade. Walcott joined Arsenal as a 16-year-old from Southampton in January 2006.
Theo Walcott will lag behind the club’s top earners, Mesut Ozil and Alexis Sanchez, who are both on £130,000-a-week, but he will remain in the second bracket of players alongside the likes of Petr Cech, Aaron Ramsey, Laurent Koscielny and Danny Welbeck. Jack Wilshere is also closing in on a new £110,000-a-week deal.
It is a huge boost to Arsene Wenger as the team s preparations for what he hopes will be a genuine title challenge next season.
The Arsenal manager has been consistent in saying that he wants to keep the 26-year-old and that he believes the best is still to come from him.
Walcott’s future had been in doubt after he was relegated to the fringes of the team following his return from a knee injury in November 2014 that had kept him sidelined for nearly a year.
But he was given the nod by Wenger to play in his favourite centre-forward role in the final two matches of last season, responding with four goals, including a brilliant strike in the FA Cup final after being preferred up front to Olivier Giroud.

This has given Theo Walcott encouragement that he will have a central role to play next season and that he still figures as a major player in Wenger’s plans.
As revealed by Football Insider, Theo Walcott and his young family are settled living in Hertfordshire and his first choice had always been to remain at Arsenal.
Football Insider revealed in May that Arsenal gave the England international three options when talks began earlier this year; accept a four-year deal, take up the 12-month extension option in his current deal or leave this summer. Walcott has chosen the first of those options.