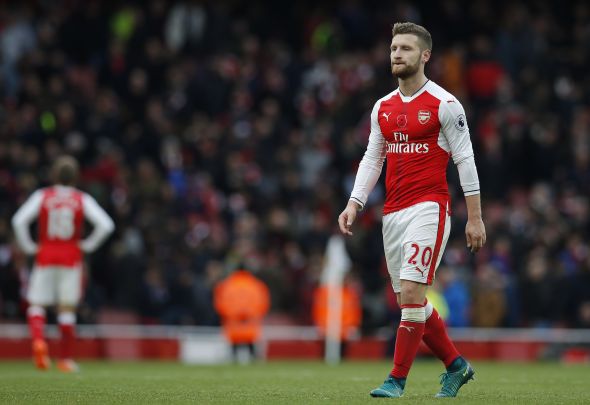 Alex Oxlade-Chamberlain has come under fire for not fulfilling his clearly vast potential at Arsenal in recent seasons – although his efforts have not been helped by recurring injury problems. He can put in moments of the highest quality, but the England man is being let down by inconsistency. However, this season, he is answering those critics. He looks to be improving every week, and his assist against Stoke took his tally for the season up to six goals and six assists from 22 games in all competitions. Some circles called for Oxlade-Chamberlain to be axed in the summer, but Arsene Wenger deserves some credit for sticking by him, and keeping faith in his ability. Even with the emergence of Alex Iwobi, Oxlade-Chamberlain is clearly benefitting from the increased first-team action, and is proving his critics wrong. Was unfortunate to be substituted, even if his replacement (Iwobi) did score.

Wenger hit by another injury

Arsene Wenger can’t have been happy to see Shkodran Mustafi leave the field after just 25 minutes with a suspected hamstring injury. Mustafi has been one of Arsenal’s stand-out performers this season, forming a solid, reliable centre-back partnership with Laurent Koscielny, which has solved many of the defensive issues Arsenal have struggled with in recent seasons. However, Wenger must now wait to find out how long Mustafi could be out for. The Gunners were handed a major boost ahead of the game with Hector Bellerin returning to the matchday squad after an injury lay-off; replacing the injured Mustafi as a substitute. His attacking potential was sorely missed with Gabriel at right-back (though the Brazilian still performed well), and Arsenal will be delighted to have him back. Mustafi joins an injury list already containing Santi Cazorla, Aaron Ramsey, Per Mertesacker and Danny Welbeck. It is highly possible that injury problems could scupper the team’s title bid once again.

The festive period is a very busy one in the Premier League, with games coming thick and fast. It gets worse if you are competing on several fronts, and for Arsenal, that means juggling their domestic title campaign with Europe as well. The Gunners beat Basel 4-1 midweek to progress to the Champions League knockout-stages as group winners, and their victory against Stoke on Saturday means their EFL cup exit to Southampton at the end of November remains their only defeat in all competitions since the opening day loss to Liverpool. The victory also saw Arsenal move to the top of the Premier League, level on points with Chelsea, who play West Brom on Sunday. They’ve put together a remarkable run in the league, and now they have confidence going into the rest of the festive period, where they will seek to make top spot in the Premier League their own. They have two tough games coming up before Christmas, away at both Everton and Manchester City, but in this form, it’s hard to write off Arsene Wenger’s side.

In other Arsenal news, here is how the players rated in the victory over Stoke.