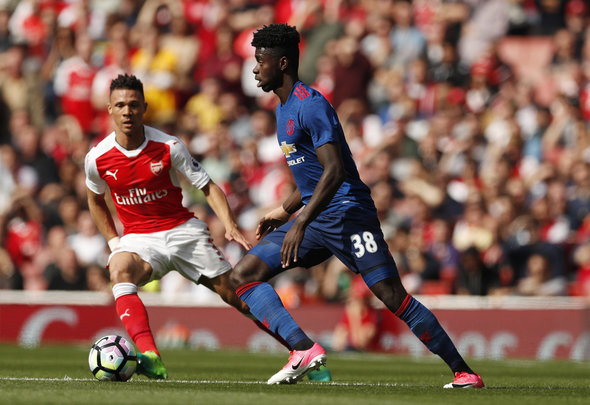 Arsenal managed to record a precious 2-0 victory at home to Manchester United on Sunday in the Premier League.

Granit Xhaka opened the scoring in the second-half with a deflected shot, before Danny Welbeck netted a second against his former club shortly after.

Arsenal seriously need to consider replacing Kieran Gibbs as the left wing-back if they plan to continue with a 3-4-3 formation. The 27-year-old was the poorest Gunners player in their win over United and really lacked any sort of quality in the attacking areas. Chelsea’s Marcos Alonso is a perfect example of what is needed to be a modern day successful left wing-back, but Gibbs looks a long way short of that. He has never been known as the most reliable of defenders, while his shocking was abysmal on Sunday afternoon. He is a solid squad player to have at your disposal, but Arsenal should be looking to bring in a world-class option in the summer to fill the role in the starting line-up.

Arsenal have endured a frustrating season so far, but one player who can certainly hold his head up high is Alex Oxlade-Chamberlain. The 23-year-old delivered another tireless performance in the Premier League and was brilliant in the right wing-back role, something he has taken to very well in recent weeks. The versatile ace showed his qualities as a central midfielder already this season and has proved his footballing brain since switching roles. He provided a delightful cross for Welbeck’s headed goal against United and his crossing is a main asset to his game.

Arsenal could have waved bye to their top four hopes if they had suffered a defeat to United, but the three points keeps them right in the race for Champions League qualification. The north London club will most likely need to win their remaining four league fixtures to stand a chance, but have the potential to beat Southampton, Stoke, Sunderland and Everton in the closing weeks. Arsenal will move just a point behind third-placed Liverpool if they win their games in hand and Jurgen Klopp’s side look like they can be caught, while fourth-placed Manchester City should have enough to get themselves over the line. The Gunners need to focus on themselves and there is still every chance they can make the top four.

In other Arsenal team news, Sanchez has given an update on his future after a disappointing season.