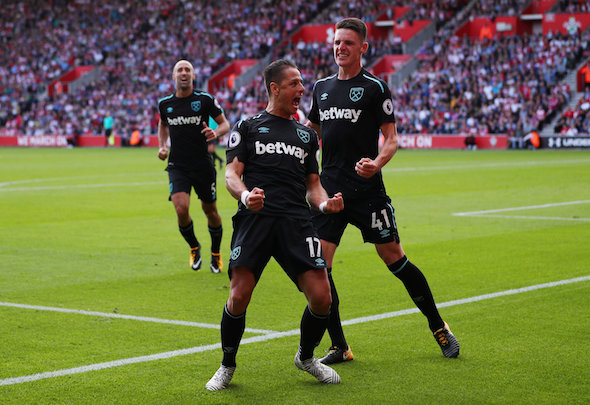 West Ham United summer signing Javier Hernandez has been named in the Telegraph’s Premier League team of the week.

The 29-year-old scored his first goals for the East London club on Saturday afternoon against Southampton at the St Mary’s Stadium.

Although he managed to bag himself a brace, the striker’s goals were not enough as West Ham conceded a last-minute penalty and suffered a 3-2 defeat.

The result means that the Hammers have now lost both of their first two Premier League matches after suffering an emphatic 4-0 defeat at the hands of Manchester United on the opening weekend of the campaign.

Despite the loss, Telegraph chief football correspondent Jason Burt picked the Mexican in his team of the week and explained on the newspaper’s official website that Hernandez was back to his “predatory best” against Southampton.

The Mexico international enjoyed a fine goalscoring record in England during his five-year with Manchester United, notching up 37 Premier League goals.

As the Hammers now find themselves in a terrible position at the foot of the Premier League table, Hernandez will need to find himself on the scoresheet on a regular basis this season.

The striker could feature in the midweek League Cup tie against Cheltenham Town on Wednesday night.

In other West Ham news, this Hammers attacker is favouring a move to Premier League rivals.