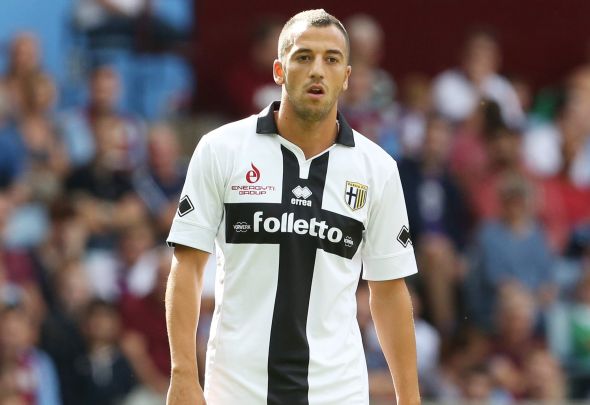 Everton have staged discussions over a potential January move for Standard Liege target man Ishak Belfodil, according to a report.

The Daily Mail claim Everton were in talks to sign the 24-year-old, as Ronald Koeman looks to enter the January transfer window to kickstart the Toffees’ Premier League campaign.

A 14-time Algeria international, Belfodil has been in magnificent form for Belgian outfit Standard Liege this season after having a hand in 13 goals in 21 league and cup games.

Scoring nine of those strikes himself, the 6ft 3in forward used his aerial ability to provide a further four goals for the Belgian giants.

The Toffees are likely to enter the January transfer window for a striker, as they look to provide cover for undisputed first-choice striker Romelu Lukaku.

With Arouna Kone continuing his battle to overcome injury and £13million flop Oumar Niasse set to be offloaded after a dismal start to life in Merseyside, a back-up striker is needed.

Standard’s number 99 has played for a whole host of illustrious clubs such as Lyon, Inter Milan and Parma, and could add Everton to that list this month.

A striker should be on the top of Koeman’s agenda this month, with the Toffees relying solely on Belgium international Lukaku to supply their goalscoring threat. A drop in form or an injury to the former Chelsea and Anderlecht ace will see the Merseyside outfit struggle to find the back of the net. Bringing in a striker with the pedigree that Belfodil possesses could even get the best out of Lukaku, as it will keep him on his toes by providing top-quality competition. With his contract at Standard set to end in 2018, Belfodil could be allowed to leave the Belgian outfit on the cheap as they look to prevent losing him on a free next season.

In other Everton transfer news, Koeman is also eyeing a move for this 34-time England international.