Darren Bent claims Everton attacker Moise Kean will want out of Goodison Park as his relationship with the club has been tarnished.

Speaking exclusively to Football Insider correspondent Laura O’Leary, the former England international revealed he was 99.9% sure Kean’s agent would have been demanding a January exit for his client following the draw with Manchester United.

Kean was brought on a substitute during the 1-1 draw with Man United on Sunday but played only 19 minutes with Toffees caretaker manager Duncan Ferguson opting to haul him off.

Bent admitted that he was unsure whether the 19-year-old striker would leave on loan or on a permanent basis but the fact remains that he will just want out.

“It wouldn’t surprise me if Moise Kean is out of there in January,” Bent told Football Insider.

“I’m probably 99.9% sure that his agent was banging on that door, soon as that game finished, on the phone to the chairman, the manager, saying I want him out of there.

“On loan or permanent, he wants to get out of there as that relationship is tarnished.” 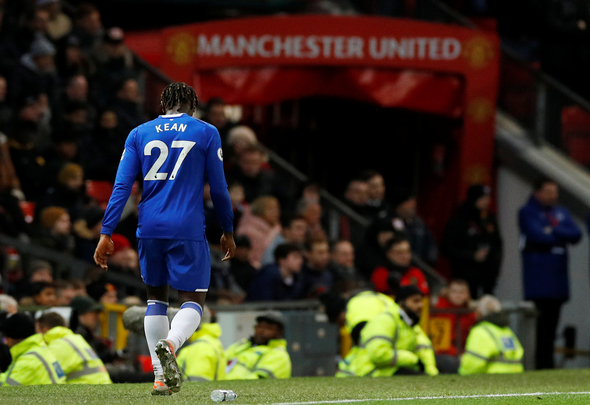 Kean arrived at Goodison Park in the summer with the Toffees agreeing on a deal that could end up being worth £27.5million for his services with Juventus.

The teenage sensation has only featured a total of 14 times for the Merseyside giants so far and is yet to score a goal for the club.

In his 2018/19 season, Kean scored seven goals in the 17 appearances he made for Juventus, with six of his goals coming in Serie A.

In other Everton news, Paul Robinson blown away by Toffees pursuit of goal machine in red-hot form.