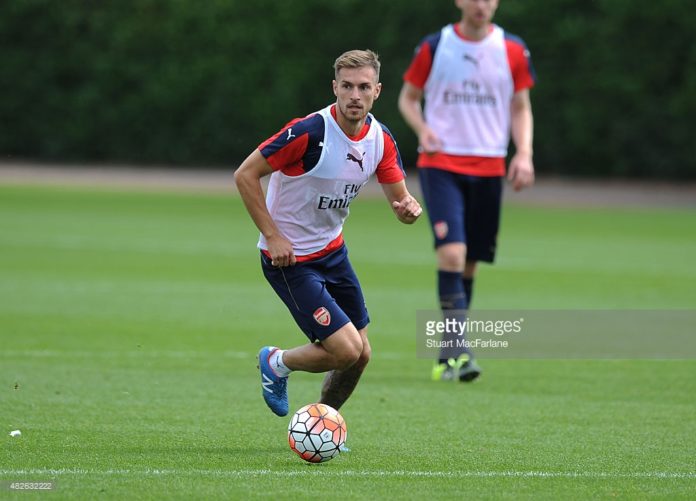 By Arsenal correspondent Tony Hughes
Aaron Ramsey has told Arsene Wenger during talks that he wants to be handed a central midfield role this season, Football Insider sources understand.

The Wales international has spoken of his frustration that he was forced out to the right flank in the final months of last season after being overlooked in favour of Francis Coquelin and Santi Cazorla.
Sources have said that Ramsey has also spoken privately with Wenger in pre-season to find out where he figures positionally in the manager’s thinking in the upcoming campaign.
In turn, Wenger is believed to have given the 24-year-old assurances that he will be given opportunities to reclaim the spot in which he thrived during the first half of 2013-14 before the first of a series of injuries halted his progress.
Ramsey was selected to start alongside Coquelin in central midfield for Arsenal’s 1-0 Community Shield win over Chelsea last Sunday, with Cazorla pushed forward to an advanced role on the left flank and Alex Oxlade-Chamberlain on the right.
Wenger must now decide which of Ramsey or Cazorla to pair with midfield anchorman Coquelin for the Gunner’s Premier League curtain-raiser against West Ham on Sunday.

Cazorla and Coquelin formed an excellent partnership in the second half of last season as Arsenal overcome a poor start to the campaign to win the FA Cup and clinch third place in the Premier League.
Asked last week if he wants to move back to the centre, Ramsey said: “That’s my target now. To have a good pre-season and get my place back in the middle.
“That’s what I’ll be looking to do. That’s where I think my best position is, that’s where I feel comfortable. Obviously, I did a job for the manager, which he asked me to do at the end of last season and, hopefully, I can get back in there, stay fit and healthy and have a good year.”