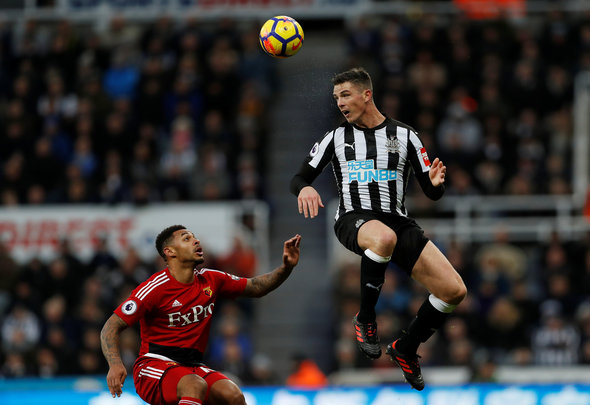 Ciaran Clark has enjoyed an inconsistent start to his Newcastle career since joining from Aston Villa in 2016, and this was in evidence today during the fixture versus Crystal Palace.
The Republic of Ireland international never looked comfortable, and his wild play also cost Newcastle as the Magpies conceded a penalty.
Luka Milivojevic took and scored the penalty to level the score at 1-1, and neither side could find the winner as the game ended as a stalemate.
Newcastle fans were quick to slate the 28-year-old, and some fans took to Twitter to voice their concern following the match.
Here are a few of the best reactions:

Ciaran Clark has been an absolute liability this season mind #NUFC

Ciaran Clark is costing us loads of goals lately #NUFC

People saying the penalty was soft. It was, but Ciaran Clark is forever pulling the opponent's shirts. This was always going to happen at some point and hopefully he'll learn from this and stop bloody doing it. Better now than in the last few weeks of the season. #nufc

The result leaves Newcastle slap bang in the middle of a relegation battle, only one point away from the drop zone.
Some fans are calling for Clark to be benched following the results, as the 28-year-old once again hindered the Magpies performance.
Rafa Benitez was aiming to bring in some defensive cover during the january transfer window, but the issues ragrding the sale of the club inhibitted his ability to sign players.
In other Newcastle news, Football Insider consider three things we learned during the fixture.
We’ve launched a << BREAKING NEWS FEED>> exclusively for your club. ‘Like Us’ on Facebook by clicking here if you want 24/7 updates on all Newcastle United breaking news.