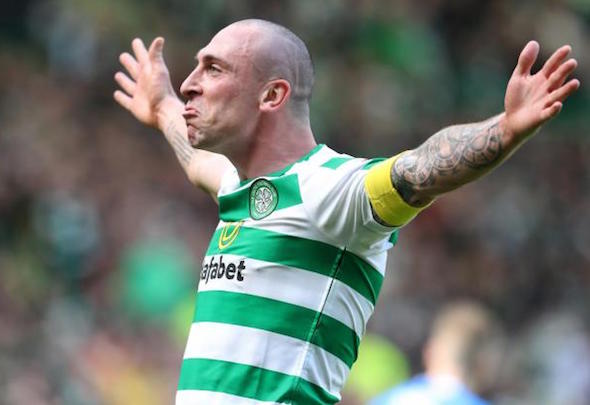 Broadcaster Adrian Durham launched a scathing attack on “clown” Scott Brown as he linked his Old Firm conduct with a spate of violent incidents in Glasgow after the shame game.

Scottish Police Federation vice-chair David Hamilton slammed the carnage in the city centre on Sunday night after Brown was at the centre of a series of flashpoints in Sunday’s 2-1 win Celtic triumph over Rangers.

Durham, whose rant was slammed by Celts fans, called on Brown to be a true, inspirational leader at a time when Scottish football is poisoned by hate and violence off the pitch.

Durham told talkSPORT’s Drive programme: “Instead of Scott Brown sending out fishing emojis on Twitter last night, instead of dancing in front of Rangers fans, why not use your brain, rise above that kind of nonsense that excites small-minded fools and trolls to the point where they’re stabbing each other, and try instead to change hearts and minds?

“Why not use your position to impact the game positively? Time to put the clown costume away for good.  Time to grow up, time for you Scott Brown to be a real man and send out messages to fans promoting peace, rejecting sectarianism, rejecting violence and hate.

“Don’t just pay lip service to it and read out statements prepared by the Celtic press officer or wear a t-shirt in the warm-up. Use your position as a force of good and let that be your legacy to the game.

“Scott Brown, you’re 33 years old and you’re known as an antagonist. Time to set the right example, be a true role model.

“You’ve the chance now to go down in history Scott Brown as the man who forced Scottish football to change and change for the better.”

“Why not use your brain, rise above the nonsense that excites fools and trolls.”

Some Celtic fans have railed at criticism of Brown for his Old Firm conduct, and fully endorsed his trolling of Rangers on Instagram. Shame on them. Deep down, the more sensible section of the club’s huge support will have been squirming at how the veteran midfielder behaved on the pitch on Sunday. It was embarrassing. The midfielder might relish his role as the pantomime villain whenever he steps on the park but the faux hard man act got old a long time ago. He has been around the game enough to know what kind of reaction his gestures and actions towards the Rangers fans would have as his side clinched a derby win that all-but secures eight-in-a-row. Sure, celebrate. But, why antagonise 800 Gers supporters when there are 60,000 Celtic fans around the ground? It was baffling and designed purely to wind up Bears. The melee that marred the end of the game only happened because Brown wanted to taunt rather than celebrate. It was classless and his legacy is threatening to be a tainted one.

In other Celtic news, the club are in pole position to sign a Rangers first team player.