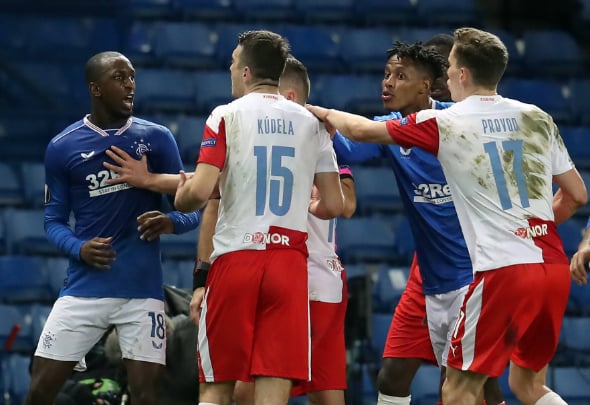 Gabby Agbonlahor has called on UEFA to extend Ondrej Kudela’s ban to a year after he was found guilty of “racist behaviour” towards Rangers midfielder Glen Kamara.

Speaking exclusively to Football Insider, the ex-Aston Villa and England striker delivered his verdict after the Slavia Prague defender was handed a 10-game suspension by the governing body.

UEFA handed the 34-year-old the maximum punishment for racism after an incident at the end of Slavia’s Europa League tie with Rangers last month.

Police Scotland have submitted a case of ‘racially aggravated conduct’ has been submitted to prosecution services but the Czech government insist he will not be extradited.

Kudela still protests his innocence and the Scottish Sun report he’s been urged to lodge an appeal with the Court of Arbitration for Sport in Switzerland.

“He can appeal all he likes, but he won’t succeed,” Agbonlahor told Football Insider correspondent Connor Whitley.

“A 10 game ban isn’t enough. He deserves a year ban. He has to get longer. It’s not good enough.

“It looks like UEFA had a two-minute zoom call and said ‘10 games, let’s move on.’

“But earlier this week when they’re about to lose money [with the Super League] they would have been having a 24-hour zoom call because their whole brand is going to lose money.

“It’s just shocking, to be honest.”

Kamara was also handed an initial five-game ban for an incident in the tunnel following the final whistle but that has been reduced to a three-match suspension.

Kudela missed both legs of Slavia’s quarter-final defeat to Arsenal so has eight games left to serve of his ban.

In other news, there has been a huge update on Ryan Kent’s Rangers future.