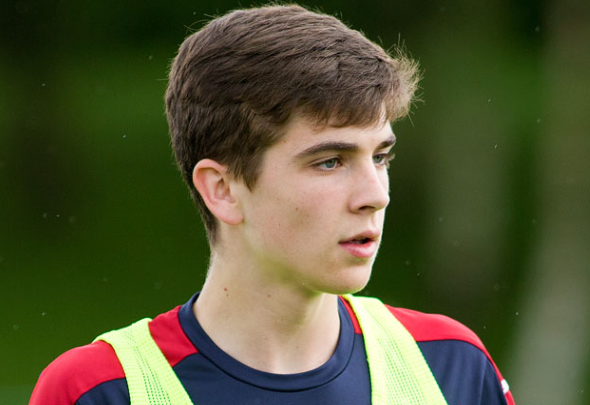 Rangers tied up another contract extension on Thursday when they announced that 17-year-old midfielder Cammy Palmer has signed a new deal with the Ibrox giants – and the young midfielder will be hoping to force his way into the first-team squad.

Palmer has been a standout for the Under-20’s side this season as they have played elite English and European sides in the club’s ambitious ‘Games Programme.’

The Gers confirmed Palmer had signed a new deal on their official Twitter on Thursday.

📝 @RFC_Youth Academy are delighted to announce that Cameron Palmer has signed a new contract until summer 2020. pic.twitter.com/Gp2IQByfiL

Palmer has won rave reviews for his performances in the Under-20’s this season after stepping up an age group and will be hoping to follow the likes of Ross McCrorie and Jamie Barjonas into the first-team squad.

The talented midfielder is highly thought of at Ibrox and extending his contract is another sign of the faith the Gers’ hierarchy have in him.

With the likes of Greg Docherty, Sean Goss, Jason Holt and Graham Dorrans all vying for places in the starting XI, Palmer may have to bide his time but at only 17 has plenty of time to continue his development and force his way into the senior squad.

The talented youngster is the latest in a line of Canadians to come through the club’s ranks in recent years following Fraser Aird and Luca Gasparotto.