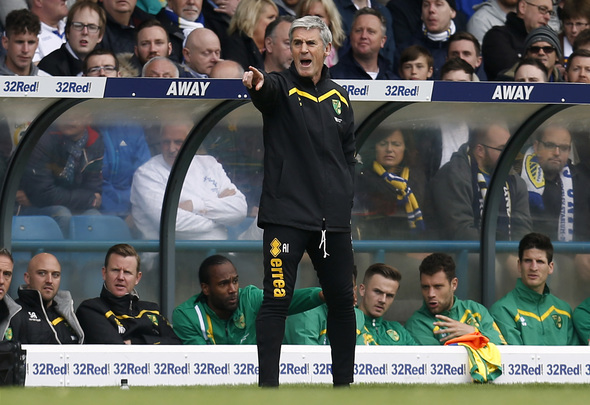 Alan Irvine had applauded the Leeds supporters after they generated a raucous atmosphere at Elland Road in their 3-3 draw with Norwich on Saturday.

Garry Monk’s side came from three goals behind to earn a point in a bitter-sweet game which meant that their bid to finish in the Championship play-off spots was all-but ended.

Leeds are three points behind sixth-placed Fulham going into their final fixture of the campaign at Wigan this weekend, but also have to overcome a huge gap in goal difference, meaning that it is almost impossible for them to finish anywhere but outside the top six.

Irvine, who is currently the caretaker manager at Carrow Road, admits that he was a Leeds fan when he grew up but that had no bearing on his thoughts go into the tie.

The former West Brom head coach aimed a small dig at the Elland Road faithful in the build up to the game, but since the dust has settled he has nothing but good words to say about them.

“They were great. Obviously they had a great 45 minutes like I had but a disappointing time for the 46th minute onwards,” the 58-year-old said, as quoted by the Yorkshire Evening Post.

“I was a Leeds United fan as a boy but that doesn’t mean I didn’t want to win.

“I am bitterly disappointed.”

Irvine has been in charge of Norwich since Alex Neil was relieved of his duties in March.

He’s won four games since taking charge with high-flying Brighton and Reading being two of his victims.

Monk and his men ensured that their final home game of the campaign would be an exciting one as Chris Wood, Kyle Bartley and Pablo Hernandez found the net despite the Canaries romping to a three goal lead in the first 45 minutes.

In other Leeds news, Dennis Wise has delivered his thoughts on Monk’s future at the Yorkshire club.