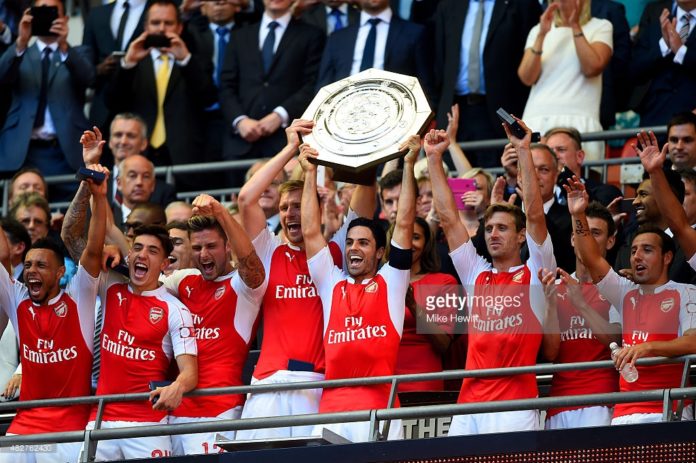 By Arsenal correspondent Tony Hughes
Alex Oxlade-Chamberlain looks ready to fulfill his potential, Diego Costa is Chelsea’s most important player and other lessons from the Community Shield showdown at Wembley.

Oxlade-Chamberlain should be a huge asset to Arsenal this season
Alex Oxlade-Chamberlain has had a stop-start Arsenal career. Long spells out injured have been bookended by inconsistency and flashes of genuine quality. When he is good, he can be very good. When he is not sharp, he can be error prone.
If his performance at Wembley is anything to go by, this could be a breakthrough season for the England international. Oxlade-Chamberlain was outstanding, terrorising the normally imperturbable Cesar Azpilicueta with his pace and trickery, and scoring a fine goal to seal Arsene Wenger’s first victory over arch-rival Jose Mourinho. If Raheem Sterling is worth £49million, then on this form Oxlade-Chamberlain could command a £50million fee.
Now aged 21 and starting his fifth season for the north Londoners, it is time for the former Southampton man to show he can be more than an exciting impact player at Emirates Stadium.
Fully fit following the groin injury that sidelined him for the final months of last season, he has the quality and matchwinning potential to rival Mesut Ozil, Alexis Sanchez and Theo Walcott for a regular starting place and deliver on a more consistent basis.

Chelsea too predictable without Costa
If the second half of last season taught us anything, it is that Chelsea lack firepower without their No1 striker Diego Costa. For all the brilliance of Eden Hazard, the vision of Cesc Fabregas and the no-holds-barred commitment of John Terry, it is the feisty and physical Spain international,  more than anyone, who makes Chelsea such a horrible opponent.
His trademark hamstring problem flared up again to reduce him to the role of a spectator at Wembley, and give hope to opposition defences that his availability this season could once again depend upon medical approval.
Given the gulf in calibre between Costa and his deputies Radamel Falcao and Loic Remy, neither of whom impressed in the 45 minutes they were each given on Sunday, the 26-year-old is arguably the most important player in Jose Mourinho’s squad.

Petr Cech promises to be everything Arsenal need him to be
How reassuring it must have been for Per Mertesacker and company to glance behind them during this match and see Petr Cech, a bastion of calm and consistency for a decade. How Arsenal have longed for such a goalkeeper during that period, and how certain it looks that they have finally found the right man.
Cech had virtually nothing to do for three-quarters of his debut. But when called upon, he pulled off an athletic save to deny Oscar and his mere presence appeared to put off Eden Hazard and Willian from close range. More importantly, the former Chelsea man radiated composure and class. The new Arsenal No1 (how Gooners must delight at that title) promises to be everything his employers need him to be.