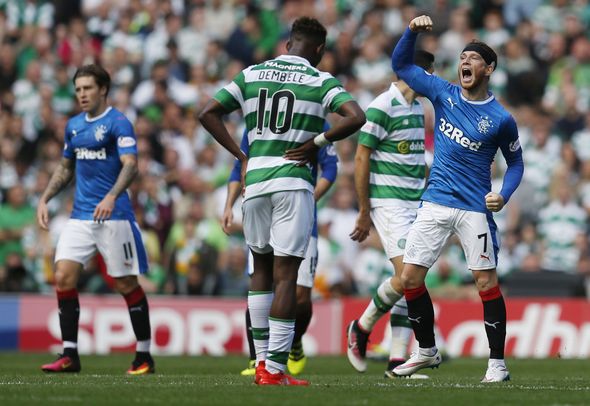 Ally McCoist has called on Rangers’ Joe Garner to control his aggression after his overzealous tackle on Hamilton’s Dougie Imrie earlier this month.

Garner, 28, was lucky to escape with a booking during the 6-0 win in the Scottish Cup, that saw the former Preston North End forward score a sublime hat-trick despite coming off the bench.

Former Gers boss McCoist called on the versatile forward to curb his anger on the Sunday Post’s website, ahead of Saturday’s clash against Motherwell.

“I played with boys when you were allowed to be aggressive,” McCoist said. “With someone like Garner there’s a thin line that you obviously can’t cross. But if you take that away from him, you take away from his game.

“It’s very important that he gets the balance right for him and the team.”

Garner’s rush of blood earned him his eighth yellow card of the season, as he slid in dangerously on Accies midfielder Imrie.

McCoist believes Garner must now avoid letting his temper get the better of him in order to give his side the best chance of winning, as he looks to add to his measly six goals this season.

Pedro Caixinha takes charge of his second match after the international break, as the 54-time Scottish champions look to keep the pressure on Aberdeen with victory against Motherwell.

Victory for the Gers could see Garner and Caixinha move to within just five points of Derek McInnes’ side, if the Dons lose to Dundee on Friday night at Dens Park.

In other Rangers news, this Premier League veteran is a new contender to become Caixinha’s local assistant.