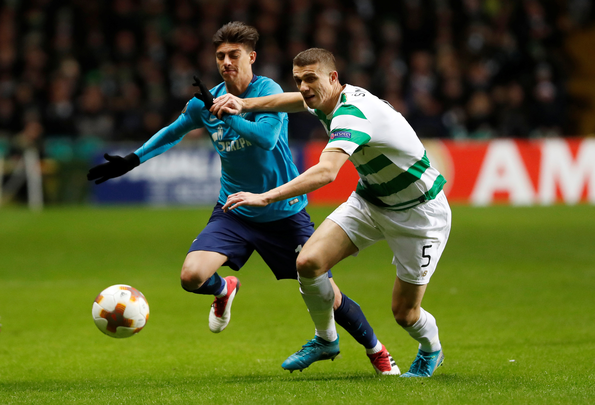 Celtic supporters on Twitter have raved about Jozo Simunovic after the widely-criticised defender turned in his best performance in a long time in the 1-0 win against Zenit in the Europa League at Parkhead on Thursday night.
The Bosnian and his defensive partner Kristoffer Ajer were rock solid at the back as the Bhoys deservedly triumphed, and Simunovic, who was hammered for his performance in the recent match against Partick Thistle, didn’t put a foot wrong on the night.
Here are some of the best reactions from Twitter to the 23-year-old’s performance:

Great result and performance tonight and I am absolutely delighted for Jozo, he's had a rough time recently and taken huge stick but when he's fit he's our best CH by a mile.

Credit to Big jozo and Ajer the night, solid performance.

Ajer and Jozo looked brilliant together tonight, can only hope their form continues domestically and next week in Russia

The Hoops deservedly defeated Roberto Mancini’s side in a match that they dominated, but had to wait until the second-half for the all important goal, Callum McGregor taking Charly Musonda’s pass in his stride and smashing the ball into the net.
Brendan Rodgers must have been delighted with the performance as the Hoops are in the middle of a massive injury crisis which ruled out almost an entire first XI for the game against Zenit.
The decision to play Eboue Kouassi worked a treat, as the 20-year-old dominated he midfield, whilst Moussa Dembele had his best performance in a while too.
The Bhoys return to league action against St Johnstone on Sunday, before a confident team makes the trip to Russia for the second leg against Zenit on Thursday.
In other Celtic news, Chris Sutton could have chosen any one of five players to be man of the match v Zenit
Don’t miss out on breaking and exclusive Celtic news by clicking here for our brilliant 24/7 updates on Facebook, Instagram and YouTube.