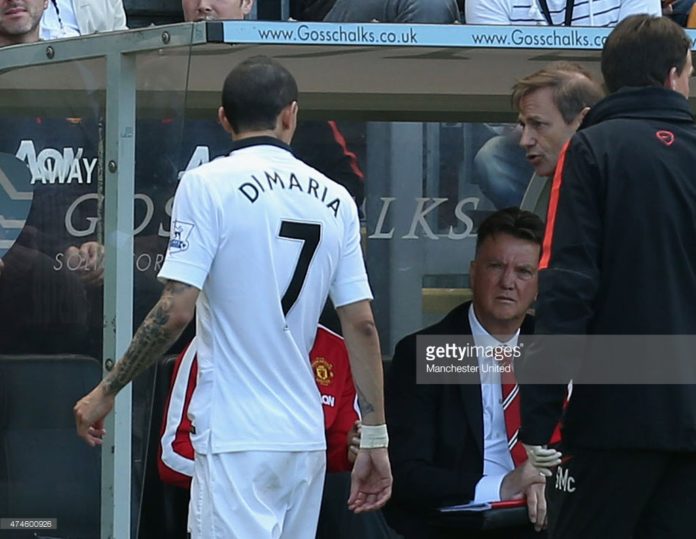 EXCLUSIVE | By Manchester correspondent Alex Stevens
Angel Di Maria will undergo a medical at PSG’s pre-season training camp in New Jersey within the next 24 hours, Football Insider sources understand.
The French champions are closing in on the signing of the Manchester United star after agreeing a fee of £45million plus add-ons.

The only remaining hurdle to the deal being signed off is the structure of payments although all parties are confident of reaching a resolution.

Di Maria is expected to be confirmed as a PSG player before they play United on tour on Thursday in Chicago. The Argentine is unlikely to figure in that match as he has not yet started pre-season training after being given an extended break following this summer’s Copa America.

Di Maria had been to due to link up with the United squad in Califorina last Saturday but he did not arrive and Louis van Gaal was unable to provide an explanation as to why.

The United manager has been reluctant to offer any comment at all on Di Maria’s future, in a clear sign that the player’s days at Old Trafford are numbered.

United are prepared to take a big financial hit on the attacking midfielder, who joined for a British record £59.7million just a year ago.

Van Gaal will not stand in the way of Di Maria, who has failed to settle in Manchester and told United some time ago that he wants to move to PSG.

The 27-year-old failed to capitalise on a bright start in English football and started just one match in the final two months of last season.

Di Maria found himself behind Ashley Young and Juan Mata in the pecking order for wide attacking roles in Louis van Gaal’s team.
His haul of 10 Premier League assists was bettered only by Cesc Fabregas (18) and Santi Cazorla (11) but he was a bit-part figure after Christmas.
PSG tried to sign Di Maria from Real Madrid last summer but their plans were scuppered when their spending power was curbed by UEFA for breaching Financial Fair Play rules.