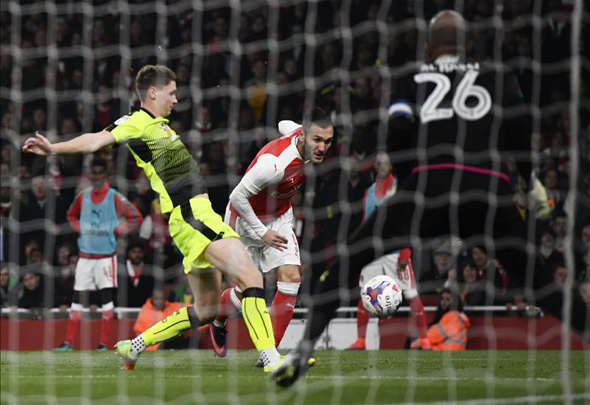 Lucas Perez should be brought in to the Arsenal line-up to face Southampton in the EFL Cup quarter-final clash at the Emirates on Wednesday evening.

The 28-year-old has missed the last month through injury after being brought off in the last round triumph against Reading.

Manager Arsene Wenger revealed that the Spaniard had returned to training last Friday and that he could feature against the Saints.

Southampton are also known for their wholesale changes under Claude Puel and they may play at a lower intensity due to the demands of the Premier League and the Europa League.

Therefore, the match would be perfect for Perez to start and get some much needed minutes under his belt.

However, Wenger must not take the Saints lightly and will still need to name a strong line-up to overcome the tricky opponents at home.

Olivier Giroud should come in for Alexis Sanchez, taking up the forward role.

The Frenchman has scored five goals in his last six Arsenal appearances and could prove vital for his side in the league if his scoring form continues.

Young star Alex Iwobi will continue his development behind Giroud, alongside Aaron Ramsey and Perez.

The front three will be keen to cause problems to a Southampton defence, which will likely be without star defender Virgil van Dijk for the cup competition.

Behind the trio should see combative midfielders Granit Xhaka and Mohamed Elneny. The duo gave a very strong performance against Bournemouth on Sunday and should be given the opportunity to continue their partnership against another difficult foe.

The defence must also see little change with Laurent Koscielny and Shkodran Mustafi retaining their places as the club’s centre-backs.

It is likely that the Saints rested Shane Long against Everton for this clash and the Republic of Ireland international’s pace can cause massive problems to an inexperienced defence.

Meanwhile, David Ospina should prove a capable replacement for Petr Cech in the Gunners net, as the nominated cup goalkeeper.

In other Arsenal team news, the Gunners suffered a shattering injury blow following the win over the Cherries.