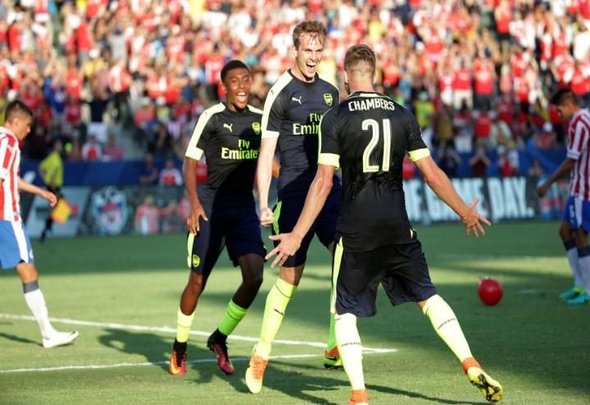 Arsenal defenders Rob Holding and Calum Chambers are set to partner each other at the heart of the England Under-21s defence against Kazakhstan.

The 2017 European Championships qualifier is due to start at 4pm, as Aidy Boothroyd’s side face a testing away tie in Eastern Europe.

England revealed the team news on their official Twitter account, with Holding and Chambers lining up alongside the likes of Southampton pair Nathan Redmond and James Ward-Prowse.

Three points for the Young Lions would see them progress to next summer’s tournament which is set to be held in Poland, leaving them with a meaningless match against Bosnia & Herzegovina on Tuesday.

England produced a dominant display against Kazakhstan just under 12 months ago in the reverse fixture, which saw Arsenal star Chuba Akpom add a late third to Redmond and Ruben Loftus-Cheek strikes in a 3-0 win.

Confidence will be high in the camp following a 6-1 demolition of Norway, which saw Manchester United and senior England international Marcus Rashford score a hat-trick.

Holding has made an impressive start to life at the Emirates following his £2million summer move from Bolton, including a superb display in the Gunners’ 0-0 draw with champions Leicester.

Arsenal’s number 16 is currently considered above former Southampton star Chambers in the centre-back pecking order, but both of them find themselves out of the starting eleven following the £35million signing of Shkodran Mustafi from Valencia.

In other Arsenal news, Mesut Ozil has revealed the three pieces of advice he gave defender Mustafi before he moved to North London.