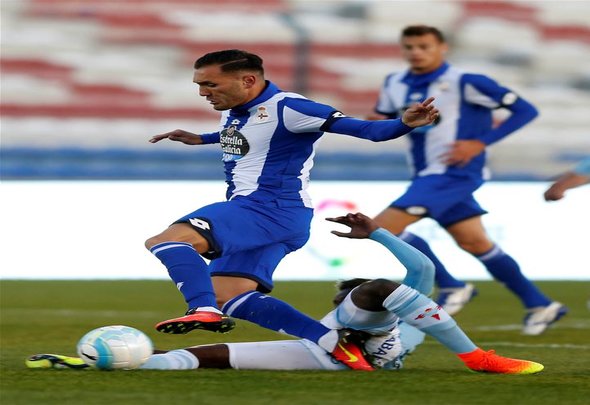 Lucas Perez scored his first goals for Arsenal with a brace against Nottingham Forest in the EFL Cup on Tuesday – and fans have praised the striker for his performance on Twitter.

Perez, 28, joined Arsenal this summer from Deportivo for £17million and was forced to wait until his third game to get off the mark for his new club.

The forward scored twice in 11 minutes to put the game beyond doubt and help secure a decisive 4-0 win for the Gunners.

Supporters on Twitter commended Perez for his goals, while others were already clamouring for more this weekend ahead of the showdown against bitter rivals Chelsea.

Yes Lucas! Congrats on scoring your first and second goals! Can we please have some more on Saturday

congratulation bro hope to see more goals from you.

great goals welcome to the Arsenal 👍

The striker’s goals were sandwiched between a stunning long-range drive from Granit Xhaka and a clinical solo effort from Alex Oxlade-Chamberlain.

Perez has now scored 54 goals and provided 38 assists in 180 matches throughout his career.

He has enjoyed spells with Rayo Vallecano, Karpaty Lviv and PAOK before joining Arsene Wenger’s side.

Arsenal are now preparing to welcome Chelsea to the Emirates on Saturday knowing that a win could see them end the day second in the Premier League.

In other Arsenal news, Manchester City have identified Hector Bellerin as a key transfer target and Gunners fans have had a mixed reaction the news on Twitter.