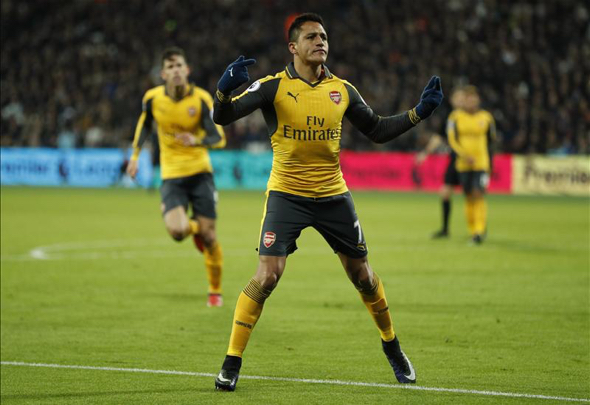 Alexis Sanchez has been named Arsenal’s Vitality player of the month for November – and fans have hailed their star man.

The Chile forward, 27, has contributed 13 goals and nine assists from 19 games in all competitions this season, and has become Arsenal’s most prized asset.

Sanchez beat the in-form Olivier Giroud – who contributed three goals and an assist last month – and Mesut Ozil to the award. He received over 50% of the votes cast by Gunners fans.

This is the second time Sanchez has won the award this season, having been named Arsenal’s player of the month for September. Laurent Koscielny (August) and Ozil (October) are the other two players to have won the awards this term.

Arsenal fans believed Sanchez to be the club’s best player last month, and are delighted that the club have given him the praise he deserves.

Here are some of their messages:

@Arsenal @Alexis_Sanchez So well deserved for the Chilean. Helps Chile qualify to the World Stage and then helps Arsenal win games.

@Arsenal @Alexis_Sanchez
A WC player with a much-deserved award.

BTW, he’s off to a decent start in December too.
A hat and an assist.

@Arsenal @Alexis_Sanchez I knew it

@Arsenal @Alexis_Sanchez let’s have the same again this month Alexis!!????

@Arsenal @Alexis_Sanchez we’re proud of you. Keep it up

Just six days in, the 27-year-old has already made a compelling case to be named December’s player of the month, after scoring a superb hat-trick in the 5-1 win over West Ham on Saturday.

Despite calls to hand him a much-deserved rest, Sanchez has travelled to Switzerland as Arsene Wenger’s side prepare to face off against FC Basel in the Champions League on Tuesday night.

In other Arsenal news, ex-Gunner Emmanuel Petit has hailed this senior figure.