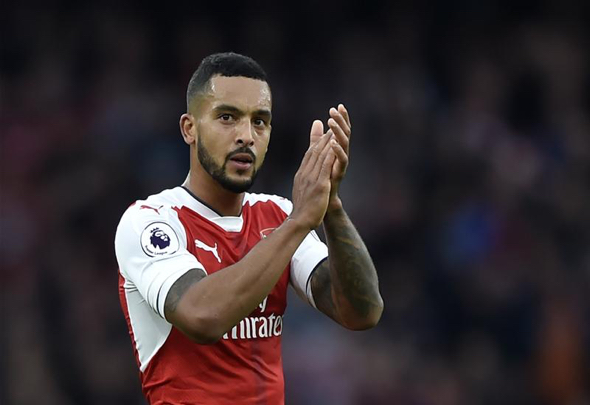 Arsenal have axed Theo Walcott from the starting XI that takes on Bayern Munich – and fans on Twitter have provided mixed views.

Arsene Wenger’s side take on the German champions in a crucial Champions League clash, knowing a heavy defeat could see their hopes of progressing through to the next stage ending at the first hurdle.

The Gunners were beaten 5-1 the last time they played Bayern at the Allianz Arena, that was when Manchester City boss Pep Guardiola was in charge.

Nonetheless, Wenger has opted to leave out attacking ace Walcott for this match as Alex Oxlade-Chamberlain is selected ahead of the senior player.

One fan believes that Walcott offers more scoring threat than Chamberlain and the England international should have started the match.

However, another supporter stated that he wanted Walcott to start due to his pace and his precise finishing.

Others felt that the likes of Walcott and Danny Welbeck on the bench will be lethal for Wenger’s side in the second half.

What is that starting 11 about

No Welbeck No Walcott No Pace!!

That optimism I had all day is now gone….cheers Arsenal 👍

Walcott, Welbeck and Giroud on bench not bad tbh
Let's do this👊 COYG

Walcott, Welbeck, Giroud on the bench. Could be lethal when we need them…

Neither Walcott or Welbeck starts…. KMT

Iwobi? Over Wellbeck and Walcott???

I think either welbeck or walcott should have started, as their goal scores.. Im not sure about iwobi, hope he proves me wrong

Walcott offers more scoring threat. 14 goals so far this season so we need to target at least 1 away goal…..

Apparently Walcott is gonna be benched today night which either means Welbeck is starting, or Ox is going to the wing and Iwobi might play.

Nope nope. Walcott has to play. We need his speed and precise finishing (if he turns it on today) https://t.co/BUJeDKJqiw

Walcott has played 24 games in all competitions this season for the north London club, scoring 14 goals and supplying two assists.

He has made four appearances in the Champions League, netting on three occasions, all goals coming at the Emirates Stadium against Basel and Ludogorets.

Walcott’s last goal in the Premier League came at Manchester City in December, when his team were beaten 2-1 at the Etihad Stadium.

In other Arsenal news, this TalkSport pundit believes this Gunners ace is looking iffy ahead of the Bayern clash.