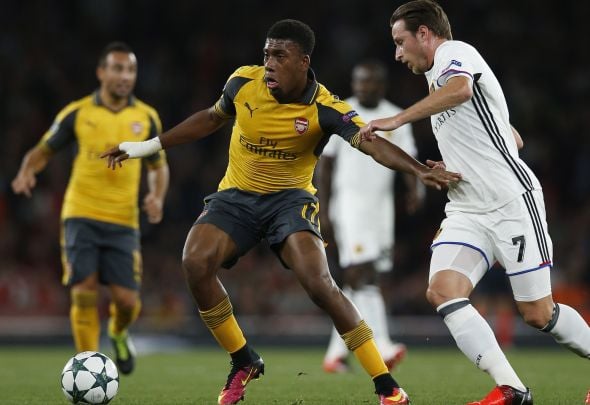 Arsenal fans enjoyed their Sunday as they took to Twitter to acclaim new young star Alex Iwobi as he struck his first international goal for Nigeria.

The 20-year-old scored the first of two goals for the Super Eagles, as they secured a vital 2-1 win away to Namibia in their campaign to qualify for the 2018 World Cup.

Iwobi took advantage of a loose ball in the Zambia box to guide the ball past goalkeeper Kennedy Mweene, before Manchester City star Kelechi Iheanacho doubled his side’s lead.

Zambia pulled a goal back, but Iwobi’s side held firm to secure an important three points as they look to qualify for Russia’s edition of the World Cup in two years’ time.

Fans are delighted for their highly-rated youngster, who could be about to sign a new contract with the Gunners after an impressive run of form that has seen him break into Arsene Wenger’s first team.

Iwobi scored his first competitive goal for Nigeria. Already off the mark for his club. Expecting big things from him this season

well played and congrats Iwobi on your 1st international goal. Hopefully it is the first of many #Big17

Unreal lad. What a player.

Man. Iwobi has so much potential. So exciting to see him play every game.

Despite playing England all the way up to the Under-18s, Iwobi opted to play for the Super Eagles after being born in Nigerian city Lagos. He made his debut for Nigeria in October 2015.

This season, manager Wenger has continued to place his faith in the youngster, with Iwobi making seven league and cup appearances.

In other Arsenal news, this transfer target could be set for a move.