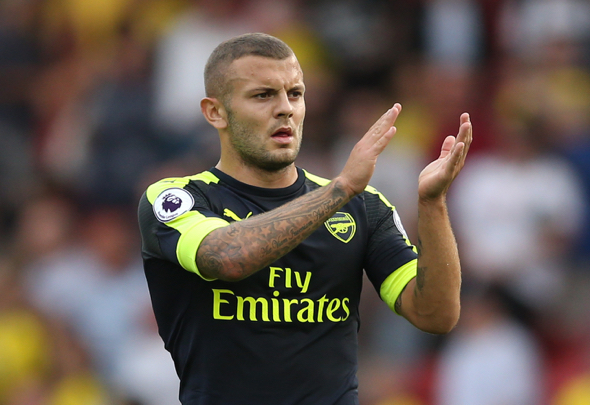 Jack Wilshere made a cameo return to the Arsenal team in their 3-1 Europa League win against Cologne on Thursday night – and fans were delighted to see him back in action.

Goals from Saed Kolasinc, Alexis Sanchez and Hector Bellerin secured a group-stage win for the home side in their first match in Europe’s secondary competition since 2000.

In a match that had its starting time delayed until 9.05pm due to thousands of visiting supporters arriving at the ground without tickets and then clashing with stewards inside Emirates Stadium, Arsene Wenger rang the changes from the team that beat Bournemouth in the Premier League last weekend.

It meant Wilshere was given his first run-out by Arsenal in 13 months as a 68th minute replacement for Alex Iwobi.

The Gunners academy product, who spent last season on loan at Bournemouth, was given a warm welcome by supporters, who were impressed with his cameo and claimed he should start Sunday’s Premier League clash against Chelsea.

Wilshere back at Arsenal and bringing a win⚪️????#afc

#AFC Wilshere was good, added something a bit different that our other midfielders dont give. Would love to see him Link up with Ozil

Can’t fault Wilshere’s performance when he came on! Hopefully he stays fit this season and we get the best out him???? #AFC #wilshere

Thought Jack Wilshere did well tonight. Wenger is kidding himself if he doesn’t think he gets in that #AFC midfield.

Great to see Alexis happy, Wilshere is back and if he can stay fit he can start for us, he’s better than Ramsey. Good for Bellerin too. #afc

#xhaka and #wilshere holding midfield in new system will be beautiful!! Alternate between Ramsey and Wilshere depending on game. #afc.

Lot of love for Jack Wilshere, hope he can stay injury free and have a decent season at Arsenal, exact midfielder they need right now #AFC