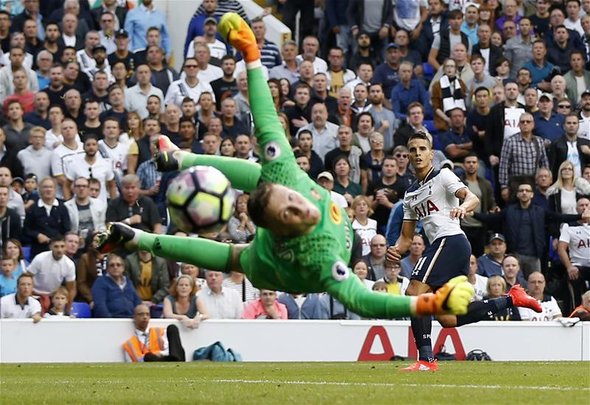 Arsenal are interested in signing Sunderland goalkeeper Jordan Pickford in January on a loan-to-buy deal – and fans are surprisingly in favour of a move.

According to the Evening Standard, Arsene Wenger is targeting the 22-year-old stopper as a long-term replacement for Petr Cech, whose recent form has come under fire from sections of supporters.

The Gunners have not kept a clean sheet in all competitions since the 2-o EFL cup victory over Reading on October 25, an alarming statistic for a side with title ambitions.

The Standard report that if Arsenal were to move for Pickford, they would allow the goalkeeper to return to Sunderland on loan until the end of the season.

However, it is said Sunderland manager David Moyes will have no intention of selling one of his most-prized assets.

The reported interest has come as a surprise to Arsenal fans, but the Gunners’ faithful seem largely in favour of a move for the youngster.

Probably would take Pickford at Arsenal tbh. As for goalkeepers for the future, I don’t want to be relying on Szczesny

I do like Arsenal going after Jordan Pickford though. Cech signing always had Title or Bust written all over it.

Arsenal interested in Jordan Pickford? Would take him in a heartbeat, bigger than Sunderland and still very young. Potentially world class.

Pickford would be a decent signing @Arsenal ?

Pickford would be a lovely signing!
English as well makes it even more interesting!

Jordan Pickford to Arsenal would be the best January transfer we would have had in years ! I will go mad if this happens #Pickford #Arsenal?

The Gunners have endured a miserable run of late, which has left their Premier League title ambitions in tatters. Back-to-back defeats to Everton and Manchester City have left Arsenal trailing league leaders Chelsea by nine points.

The north London club face West Brom on Boxing Day, and with both Tottenham and Manchester United hot on their heels, could drop out of the top-four if they fail to win.

In other Arsenal news, here’s how fans reacted to the news of Danny Welbeck’s return to training.