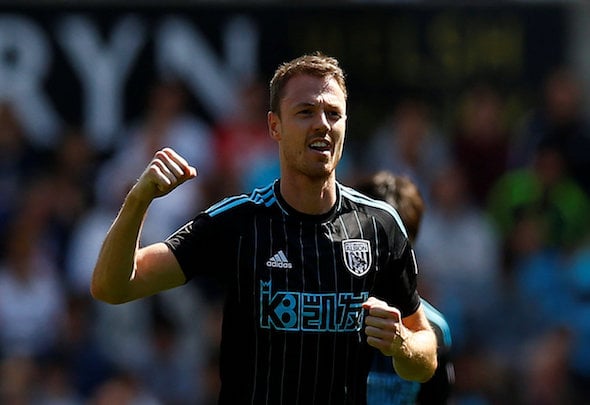 Arsenal are lining up a bid to snatch Jonny Evans from Premier League rivals West Brom, with the fee around the £25million mark, according to a report.
The Sun claim that Arsene Wenger is a big fan of the Northern Ireland international, and that the two clubs are nearing an agreement.
The ex-Manchester United enforcer was the subject of interest from both Arsenal and Manchester City during the summer, but former Baggies’ boss Tony Pulis did not want to sell.
City even put in a bid of £25million towards the end of the summer window but it was knocked back.
Evans has represented Northern Ireland 67 times, and played a part in the historical European adventure as Northern Ireland played in a major tournament for the first time since 1986, reaching the round of 16.
Should a fee be agreed, the deal could suit both clubs – as Arsenal look to secure a rocky defensive line, and with West Brom needing funds to be able to buy players.
Evans is a proven Premier League defender, having over 200 appearances over his club history with Manchester United and West Brom.
Football Insider verdict
Jonny Evans would be a good addition to Arsene Wengers back four – he brings with him a resolute form of tackling, and winning pedigree from his days at Manchester United. The international defender could start for the Gunners, who haven’t managed to secure a stable defensive line yet this season. The deal would be beneficial for both clubs, at either end of the table, although it’s not likely to be a move that makes the Arsenal faithful too excited.
In other Arsenal transfer news, the Gunners have snapped up this young Greek enforcer.
We’ve launched a << BREAKING NEWS FEED>> exclusively for your club. ‘Like Us’ on Facebook by clicking here if you want 24/7 updates on all Newcastle United breaking news.