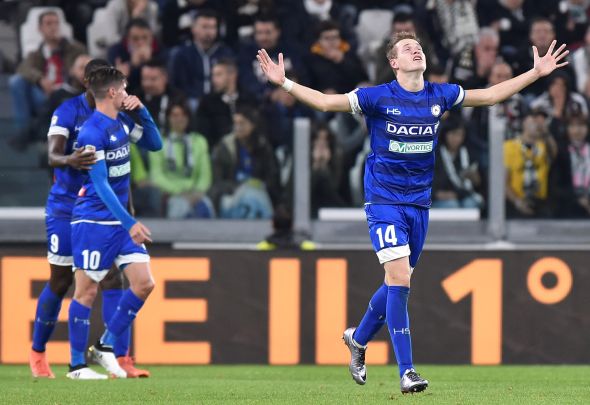 Arsenal are interested in Udinese midfielder Jakub Jankto after scouts watched him score against Torino on Sunday, according to a report.

Italian publication Gazzetta Dello Sport claim Gunners spies were in attendance at Torino’s Stadio Olimpico, as Jankto scored a superb goal to give Udinese the lead during the 2-2 draw.

The 21-year-old picked up the ball on the left after winning possession back, before driving forward with pace and unleashing an unstoppable shot that beat Joe Hart at his near post.

It is believed that the left-footed hotshot will be allowed to leave Udinese for a fee of £10million if interested clubs come calling, with Premier League outfit Stoke also interested.

However, Arsenal could take the lead after sending scouts to watch the youngster star for his side as he lifted his tally to five goals from midfield in 22 league games.

The Gunners are likely to be in the market for a central midfielder, as fans grow concerned at the performances of Granit Xhaka and Francis Coquelin.

The two-time Czech Republic international has just over two years remaining on his contract with the Serie A outfit, after breaking into the side this season following a loan spell with Ascoli.

Possessing a pile driver of a left foot, Jankto would add a directness to Arsenal’s play with his whole career ahead of him. The midfielder has pace to exploit in the middle of the park, which is becoming more and more valued after N’Golo Kante’s influence in Leicester and Chelsea’s title winning sides. Jankto has an eye for goal and holds the ability to test a goalkeeper from long range, as well as being able to lay on assist. Udinese’s number 14 has supplied four assists for his side this season and would be a top signing should Arsene Wenger opt to bring him to north London. However, he must move in the summer before his value starts to rocket, allowing Wenger to bring him in at just £10million.

In other Arsenal transfer news, the Gunners’ Premier League rivals have confirmed their interest in this midfielder.