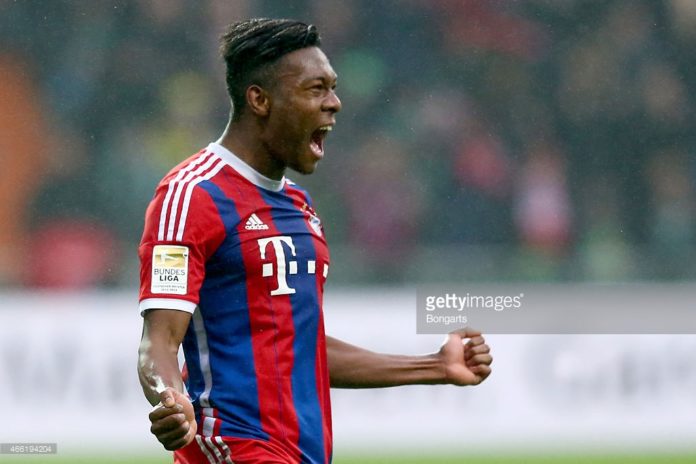 The FA Cup champions are monitoring the versatile Austria international as they identify elite players who could slot straight into Arsene Wenger’s team.
Alaba, who has three years remaining on his Bayern contract, is rated in the £30million-plus bracket by the Bundesliga champions.
The 23-year-old is on Arsenal’s radar as a result of his excellent performances for Bayern’s all-conquering side in recent seasons.
The Austrian has been an integral member of Pep Guardiola’s team, thriving initially at left-back and then in new roles both in central midfield and as one of three centre-backs. His versatility and calibre is such that he was Austria’s leading goalscorer in their 2014 World Cup qualifying campaign with six goals.
Alaba missed large portions of last season with two separate knee injuries, which sidelined him for two months from November to January, and again from early April until the end of the 2014-15 campaign. He is now fit and has been fully involved in pre-season training.

Alaba, who joined Bayern from Austria Vienna when he was 16, made his debuts for both Bayern and the Austria national team when he was 17.
He has been an established member of the German champions’ first team since he returned to the club as a 19-year-old following a successful loan spell at Hoffenheim.