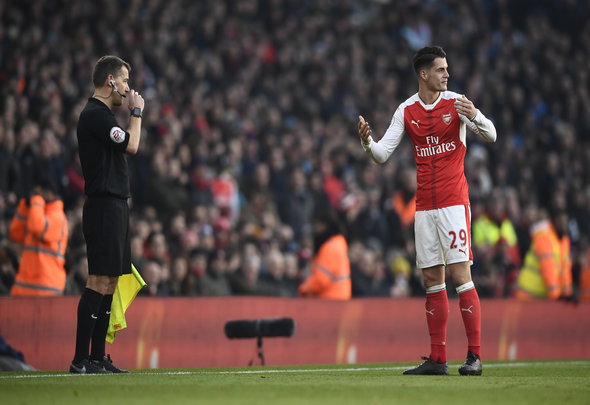 Football Insider rates the Arsenal players following their 2-1 victory against Burnley in the Premier League on Sunday.

Petr Cech 6 – The veteran goalkeeper made a number of smart saves in the Arsenal net, but enjoyed a quiet afternoon for the most part. Francis Coquelin gifted the visitors a penalty in stoppage time and Cech may have been disappointed he was unable to stop Andre Gray’s attempt straight down the middle.

Gabriel 6 – He kept his place ahead of Hector Bellerin and looked solid in the right-back position.

Laurent Koscielny 6 – The centre-back was quiet for most of the game, but made some strong late clearances as Burnley pressured 10-man Arsenal.

Shkodran Mustafi 8 – He managed to prevail in a interesting battle with striker Andre Gray and is still undefeated for the Gunners. He opened the scoring with a fantastic well-timed header into the far bottom corner.

Nacho Monreal 6 – The left-back supported the attack well and linked up with team-mate Alexis Sanchez on the wing.

Granit Xhaka 4 – The combative midfielder nearly cost his side the three points with a needless two-footed challenge in the second-half. He needs to seriously improve his disciplinary record.

Aaron Ramsey 7 – The Welshman looked lively in attack and created some good chances for his team-mates, looks to be edging closer back to his best.

Alex Iwobi 5 – The winger tried to influence the game with his speed and trickery, but was unable to unlock the Burnley defence.

Mesut Ozil 7 – Threatened the goal with a good effort from outside the box which was matched by goalkeeper Tom Heaton. He was dominant in possession and got yet another assist with his corner meeting the head of

Alexis Sanchez 8 – Missed a good opportunity to open the scoring when his curled effort just went wide of the post. He did look lively though during the match and showcased his trickery on the ball. Kept his nerve to score a late penalty in the 97th minute

Olivier Giroud 5 – The Frenchman worked hard, but was unable to threaten the Burnley goal throughout the match.

In other Arsenal news, the club are in a battle to sign a goal-scoring winger who is out of contract in the summer.