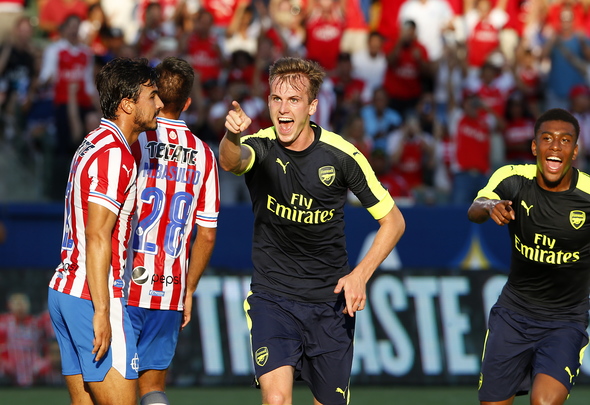 Arsenal summer signing Rob Holding has revealed that a chat with Calum Chambers persuaded him to join the Premier League giants last summer.

The 21-year-old told Arsenal’s official website that the London club were at the forefront of his thoughts and that Chambers helped to make up his mind.

Gunners boss Arsene Wenger fought off interest from rivals Chelsea, Everton and Bournemouth to sign the young defender from Bolton for a fee of around £2.5 million.

Bolton finished bottom of the Championship last season, and were relegated to the third-tier of English football. Centre-back Holding was named the club’s player of the season.

The defender added that the advice of England U21 team-mate Calum Chambers was a major factor in his decision to move to the Emirates.

“There were people with things on Twitter saying, ‘He’s linked here, he’s linked there’, but I think the concrete one that I knew, that my agent told me, was that Arsenal were interested,” he told the Arsenal website.

“I was like, ‘Wow. Arsenal are interested in me,’ so that was the one I wanted to push forward.”

He continued: “Then when I went away with England in the summer to Toulon, I spoke to Calum Chambers and he said Arsenal is a great club – ‘if it happens for you, it would be great to have you there. It was surreal.”

Despite having never played in the Premier League before, Holding was forced into making his debut on the opening day of the season against Liverpool, due to injuries to both Per Mertesacker and Gabriel Paulista.

Holding has made five appearances in all competitions for Arsenal this term, and is expected to feature on Wednesday night when the Gunners take on Southampton in the EFL cup.

In other Arsenal news, injured star Hector Bellerin hopes to return to action by the end of the week.