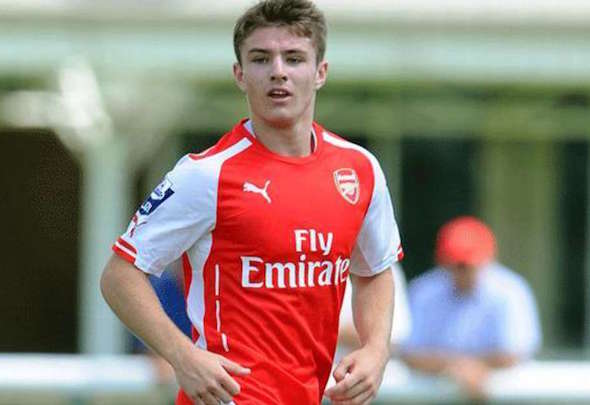 Arsenal wonderkid Dan Crowley is better at 18 than Ashley Cole was at the same age, according to Barnsley manager Lee Johnson.

Crowley was recalled from his loan at the League One club on Wednesday, the day after Theo Walcott and Alex Oxlade-Chamberlain joined the Gunners’ growing casualty list.

Johnson, who came through Arsenal’s academy, was effusive in his praise of Crowley and rubbished reports that he had failed to make the grade at the third-tier club.

Johnson said: ‘I think that Dan’s had a fantastic time here, we’ve really enjoyed working with him. He’s probably one of the best, or the best, or most talented 18-year-olds I’ve ever seen.

‘Obviously I came through the ranks at Arsenal as well, so there’s players like Ashley Cole that I include in that, players that have had very good careers.”

Injuries in midfield have depleted Arsene Wenger’s squad depleted, opening the door to Crowley, who was called by England Under-19s for the first time earlier this month.

Johnson added: “For me, it was fantastic to work with him, really enjoyed it, really appreciative to Arsenal. I think he had four or five really good effective games for us that showed his quality and where he could be.

“He had a couple of injuries, he was called up by England, which stunted the starts he could have had, but I’ve got nothing but positive thoughts about him as a lad and as a player.

“Of course, as a coach I’d love to work with him someday in the future, because I believe at some point this boy will play for the England national team, if he can iron out the little bits that will come through maturing and playing in a different level. I’m disappointed to lose him, but it’s the law.”