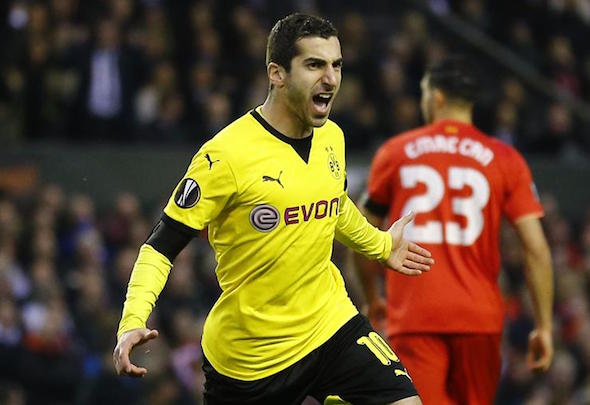 Arsenal are the only club to have tabled a bid for Borussia Dortmund playmaker Henrikh Mkhitaryan, according to a report.

Football website  Squawka claims the Gunners have submitted a formal offer for the £20million-rated Bundesliga ace as they try to take advantage of the player’s contract stalemate.

The Armenia international is a player in demand after a sensational season that ended with him being voted the Bundesliga player of the year by respected German publication Kicker.

Mkhitaryan’s current contract expires in 12 months, which has prompted interest from a string of leading European clubs including Arsenal, Tottenham and Juventus.

However, it is reported that Arsenal have made the biggest push for Mkhitaryan and that the north Londoners are the only side to have submitted a formal offer.

The Gunners are also waiting for Jamie Vardy to decide on a transfer from Leicester after triggering the striker’s £22million release clause at the start of June.

Mkhitaryan has had a brilliant season for Dortmund, scoring 23 goals and supplying an incredible 32 assists in 52 matches in all competitions.

In the Bundesliga alone, he scored 11 times and provided 20 assists from 31 games.

Dortmund have reportedly offered Mkhitaryan a deal worth £100,000 a week but the player’s agent, Mino Raiola, has spoken of his desire to move to Manchester United and work under Jose Mourinho.

“Manchester United is a unique opportunity. Micki want to go there. Micki has for months maintained that he may leave the club this summer,” Raiola said.

“Dortmund presented an official offer which was rejected, but now the BVB bosses fear their own fans.

“Suddenly, they tell Micki, that he should go next season on a free transfer. This is very bad management.”

In other Arsenal transfer news, the club are ready to sell a 23-year-old attacker amid interest from two Premier League outfits.