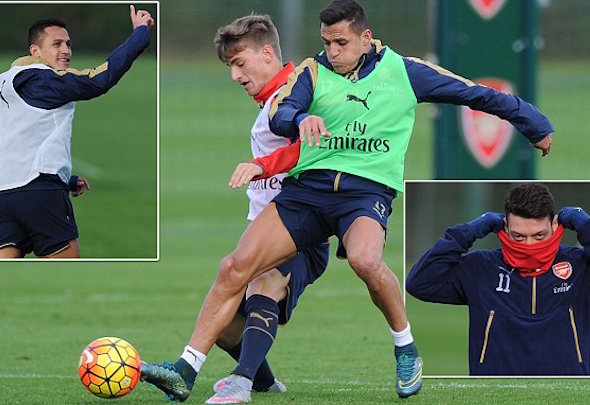 By Arsenal correspondent Tony Hughes| Premier League expert with wide experience of breaking big London-club stories, including exclusives like this
Follow us on Twitter @footyinsider247
Mesut Ozil and Alexis Sanchez were joined by a rather less celebrated Arsenal player in training as the team prepared for Saturday’s trip to West Brom.
Vlad Dragomir, aged just 16, was pictured on the Arsenal website taking part in the first-team training session on Friday as Arsene Wenger put the squad through their paces before they departed to their Midlands hotel.
The teenager was called up to the senior group despite only making his first start for Arsenal Under-18s last month.
He has impressed enough to join in with the injury-hit first-team squad along with Jeff Reine-Adelaide, 17, who is the most highly regarded of the Arsenal academy players.
Romanian Dragomir joined Arsenal in the summer after completing a £100,000 transfer from ACS Timisoara. The Romania Under-17 international signed a three-year contract with the London club.


The Gunners travel to the Hawthorns to face West Brom on Saturday afternoon, as they look to build on their six-game unbeaten run in the Premier League.
Wenger’s side are second in the league behind leaders Manchester City.