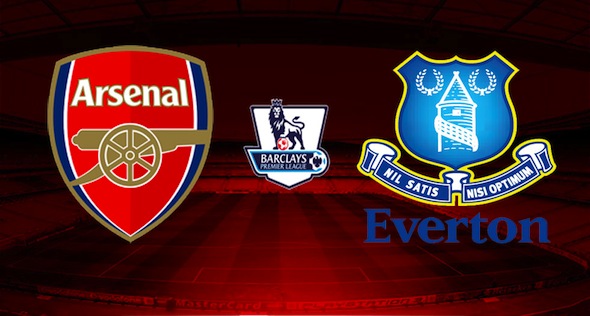 Everton had a terrible time of it last time out, going down 0-3 to Manchester United. Luke Moore previews their trip to the Emirates…
Get the best odds and a £30 free bet now by clicking here
Arsenal v Everton
Saturday, 17:30
Live on Sky Sports 1
Arsenal
This season is rapidly presenting itself as one of opportunity for Arsene Wenger’s Arsenal. With other title contenders failing to find consistency and almost without exception possessing significant weaknesses, Wenger knows that, should he be able to limit his own side’s shortcomings, his team might be lifting their first Premier League trophy since 2004 come May.
Next up is an Everton side that Arsenal have a great record against, especially at home. A confidence-boosting win against Bayern Munich on Tuesday will mean the Gunners will be coming into this game with their tails up also and they have nothing to fear from an inconsistent Toffees.
Aaron Ramsey will miss the game due to injury, and joins Danny Welbeck, David Ospina, Jack Wilshere and Tomas Rosicky on the sidelines.
Everton
Although Everton have only lost twice in the league this season and look far more coherent than last term, there is still something of the inconsistent about them. That said, they’ve had a fairly difficult start to the season and find themselves in a situation where they’ve already faced Man City, Liverpool, Spurs, Chelsea and Man United in their first nine league games.
It’s probably not going to get any easier at the Emirates on Saturday, but Roberto Martinez will be hoping he can catch Arsenal on one of their off-days after a Champions League encounter. And whatever happens this weekend, Martinez’s men have a series of winnable games coming up after this fixture.
Match Odds
My feeling is that Arsenal will win this game, but odds of 1.45 don’t really tempt. Everton are a good enough side for that sort of price to be a bit of a hiding to nothing, and Arsenal are capable of the odd implosion at home – that home defeat to Aston Villa a couple of seasons ago still haunts me now.
Everton are out at 8.00, and there is a fairly good reason for that. As I’ve touched on already, their record on the Gunners’ patch is woeful and at the moment they don’t look worthy of backing in this type of game. There may well be value in a back-to-lay of The Draw here at a lofty-looking price of 5.20, though. That price will start to inch in just as soon as the clock starts ticking and so, if we don’t see an early goal, a trade opportunity is likely to present itself.
Over/Under 2.5 Goals
Opta tell us that the average amount of goals scored in this fixture is 2.74, so well over the 2.5 goals threshold. However, the market appears to realise this too and has settled on a price of just 1.62 on this outcome, which doesn’t hold a huge amount of interest for me.
Under is currently trading at 2.62, and again, this is an opportunity. Provided there’s not an early goal we could get on this and trade it out after half an hour or so. The back of the net hasn’t been hit in the first 15 minutes of an Everton Premier League game since the first day of the season, so you may well get some wriggle room.
To Score
This is a market I’m more keen on, and one man is the chief reason – Alexis Sanchez. The Chilean is in blistering form and has scored ten goals in his last seven games for club and country. With Seamus Coleman loving to attack so much, Sanchez could find a huge amount of space through that left channel and anything around 2.40 on him to get a goal at any time must be taken.
Recommended Bet
Back Alexis Sanchez to score at 2.40 or better
Get the best odds and a £30 free bet now by clicking here