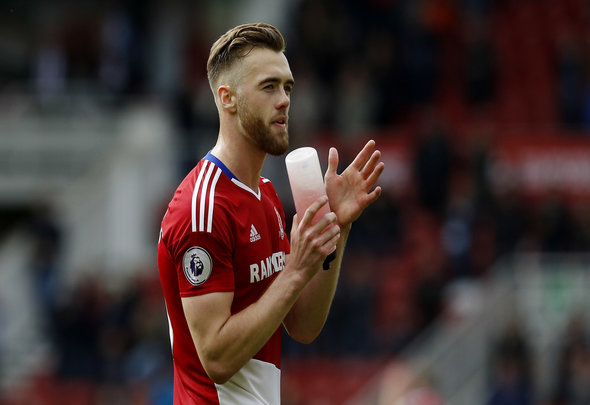 Crystal Palace are eyeing a move for Arsenal defender Calum Chambers, according to a report.

Sky Sports claimed on their transfer centre blog (Monday, 5:41pm) that Palace are interested in signing the 22-year-old.

It is understood the Gunners value the centre-back at £20million and that he is currently absent from their pre-season tour due to his involvement in Under-21s European Championships.

Chambers helped England reach the semi-finals of the summer competition and is regarded as an exciting upcoming defender.

He spent last season out on loan at Middlesbrough where he impressed despite them suffering relegation from the Premier League.

The versatile defender began his career as a right-back and has become more used as a centre-back recently.

Arsene Wenger loaned out Chambers last year to experience regular first-team action and it’s unclear whether he features in his plans for the upcoming season.

Arsenal appear to have an overland of centre-backs in their squad and it looks like at least one may have to be moved on to keep a good balance in the squad. Chambers finds himself battling alongside Shkodran Mustafi, Laurent Koscielny, Gabriel, Per Mertesacker and Rob Holding as it stands for a starting berth. Chambers is unlikely to force his way into the starting XI and perhaps a permanent move away from the Emirates Stadium would be in his best interests. Chambers showed his ability for England’s Under-21s and during his spell with Boro, but must be playing regularly to continue his development. Arsenal should definitely accept any offer that matches their £20million valuation, while clubs would be taking a slight risk splashing the cash on him.