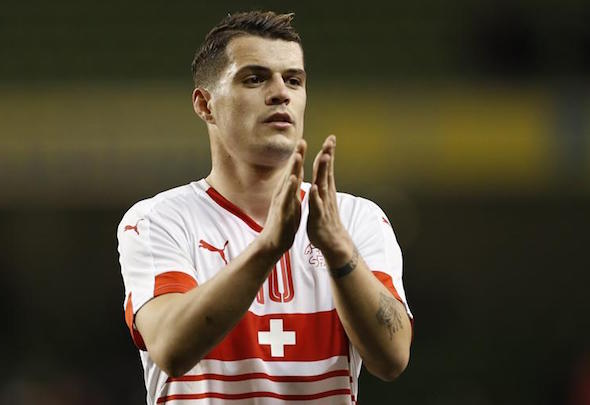 Arsenal manager Arsene Wenger has praised the strength of his midfield and singled out new-boy Granit Xhaka as an exciting prospect.

Xhaka made his move to Arsenal from German side Borussia Monchengladbach for a fee of £35 million earlier in the summer.

The Switzerland international will be looking to cement his place in the Gunners first-team, but his new manager believes the youngster has the attributes to succeed.

“He brings passing ability to play through the lines from deep positions, his work rate, and he’s good in the air,” said Wenger as quoted by Goal.

The north-London club endured a disappointing season last term, despite finishing as runners-up, which put more pressure on the much-criticised Arsenal manager.

Wenger saw a number of protests aimed at him from fans for their failure to win a league title since 2004. Wenger’s transfer policy has also come under heavy criticism from fans who believe they deserve more.

The club failed to sign any outfield players last summer, but Wenger moved for Xhaka after the departures of stalwarts, Mathieu Flamini, Mikel Arteta and Tomáš Rosický.

“We lost three midfielders: Flamini, Rosicky and Arteta, and numbers-wise we are quite solid in midfield now.

“[Mohamed] Elneny had a big impact when he came here, Coquelin was injured for a long time and is back. Cazorla will come back, Wilshere is back… so we are solid in midfield.” said Wenger.

The defensive midfielder will face stiff competition for a place in the middle of the park as Euro 2016 star Aaron Ramsey, Jack Wilshire, Mohamed Elneny, Santi Cazorla and Francis Coquelin all vie for a regular first-team spot.

In other Arsenal team news, this Arsenal star is set to miss the start of the season as he is pictured partying in Vegas.