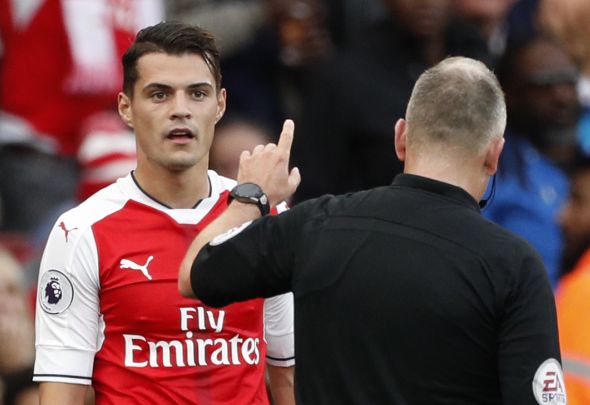 The 24-year-old, who made a £30 million summer switch from Borussia Monchengladbach, has played 14 games in all competitions.

Wenger opted to leave the midfielder out of his starting line-up for the draws against Manchester United in the league and PSG in the Champions League.

The north London club, who have not won a Premier League game since their 4-1 win at Sunderland, host Eddie Howe’s Bournemouth on Sunday afternoon at the Emirates.

Ahead of the clash, Wenger offered his thoughts on Xhaka and how he thinks he will fare in the coming games for the club.

“He needs to adapt to the way we play and the tactical pace of the English game,” said Wenger, as quoted by the Guardian. “I am confident he will do very well.”

Despite his lack of action in recent weeks, Xhaka has become a fan favourite amongst the Gunners supporters due to his combative style and personality.

He has made just six starts in the Premier League games this term, scoring one goal, but he is yet to provide an assist.

The Gunners are currently fourth in the league table with 25 points from 12 games, five behind Manchester City, who beat Burnley 2-1 on Saturday afternoon.

Their opponents are an impressive tenth with 15 points from 12 games and visit north London having beaten Stoke 1-0 during their last fixture.