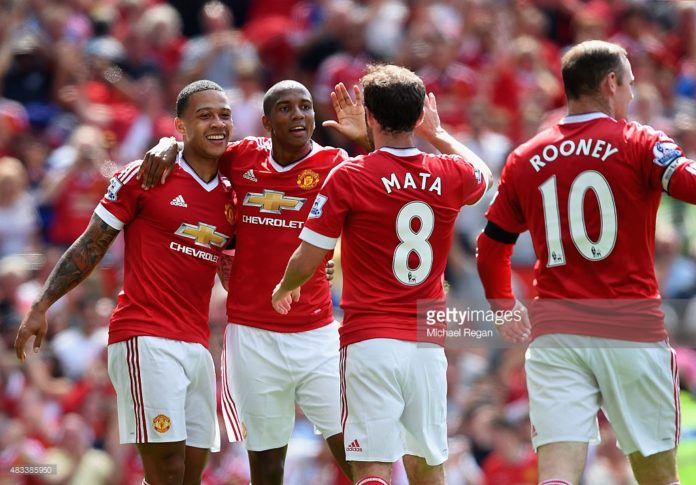 KICK-OFF TIME: Friday, 7.45pm
TV: Live on Sky Sports 1
IT’S A BIG GAME FOR…
Wayne Rooney. With Robin van Persie and Radamel Falcao having said their summer goodbyes, the Englishman has virtually no competition for the position of the attack spearhead. That is about to change, with Pedro soon to complete a transfer from Barcelona that will provide Louis van Gaal with the one thing he has been missing from his strikers over the last year; pace. Rooney was a fairly blunt weapon in United’s laboured opening-day victory over Tottenham, muffing a golden opportunity to break the deadlock before Kyle Walker duly did it for him. More will be expected from the skipper as United aim to turn a decent start to the campaign into a very good one.
PLAYER TO WATCH…
David de Gea. Will he stay or will he go? Intriguingly, will he even be brought back in from the cold and handed shock recall? The word is that he might after impressing Van Gaal with his attitude during training this week. Sergio Romero did little wrong during his debut against Spurs, even though his communication with the defenders was understandably not as well tuned as that of United’s reigning player of the year. It would be a big call for Van Gaal to recall De Gea, but he is not opposed to making those.
PAST THREE MEETINGS…
Premier League: Manchester United 3 (Herrera 2, Rooney) Aston Villa 1 (Benteke), 4 April 2015
Premier League: Aston Villa 1 (Benteke) Manchester United 1 (Falcao), 20 December 2014
Premier League: Manchester United 4 (Rooney 2, Mata, Hernandez) Aston Villa 1 (Westwood), 29 March 2014
REMEMBER WHEN…
Aston Villa were one of the finest teams in the country and Ron Atkinson steered his team to a 3-1 win over United in the 1994 Coca-Cola Cup final. Some great footage here:
https://www.youtube.com/watch?v=OxCJ-Tjr7wU
FORM GUIDE…
Manchester United in 2015/16: W (1-0 v Tottenham)
Aston Villa in 2015/16: W (1-0 v Bournemouth)
BEST BET…
Aston Villa to win after 90 minutes 5/1
HOW WILL THEY LINE UP…
Manchester United (possible): Romero; Darmian, Smalling, Blind, Shaw; Schneiderlin, Schweinsteiger; Mata, Herrera, Young; Rooney.
Aston Villa (possible): Guzan; Bacuna, Richards, Clark, Amavi; Veretout, Gueye, Westwood; Ayew, Agbonlahor; Gestede
EXPERT VERDICT… Gestede to inspire shock Villa win