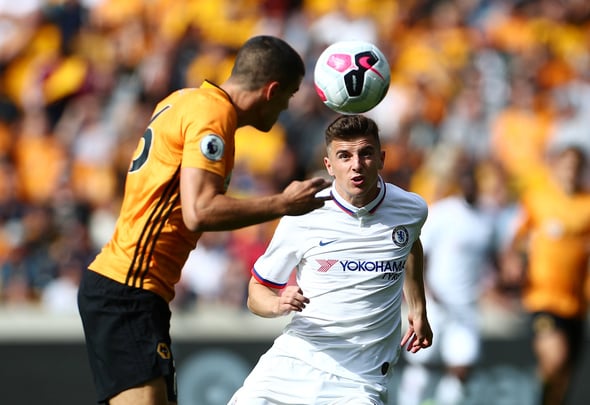 Darren Bent has slaughtered the “weak” performance of Wolves defender Conor Coady in the club’s 5-2 defeat to Chelsea on Saturday.

Speaking exclusively to Football Insider assistant editor Russell Edge, the former Aston Villa and England striker tore the centre-back’s performance to pieces, insisting he struggled both on and off the ball against the Blues.

Tammy Abraham managed to net a hat trick against Coady and his teammates, Mason Mount and Fikayo Tomori also getting on the scoresheet to make it a comfortable day for Frank Lampard’s men.

Bent says that Abraham managed to pull the 26-year-old all over the place and that he needs one of either Willy Boly or Ryan Bennett alongside him to ensure the Wolves backline remains resolute.

Bent told Football Insider: “Abraham’s roasted Conor Coady. My friends, who are a couple of Wolves supporters, have said he’s been good but when he doesn’t have that protection next to him in Boly or Ryan Bennett, he looks suspect.

“He was awful. Tammy twisted him in and out. He looked weak, his passing wasn’t there, couldn’t get on the ball. You hope that he puts that game behind him because that wasn’t a good look.

“If he has any aspirations of getting in that England squad, Saturday will not have done him any favours.”

Coady, Wolves’ captain, has played every minute of their Premier League campaign so far, while also remaining an ever-present in their Europa League qualifiers.

He failed to miss a single minute of action for Wolves across all competitions during the 2018/19 season, including an FA Cup run which saw them defeated by Watford in the semi-finals after extra time.

In other Wolves news, Football Insider can reveal that the club are plotting a transfer raid for a Leeds star after seeing multiple offers rejected.