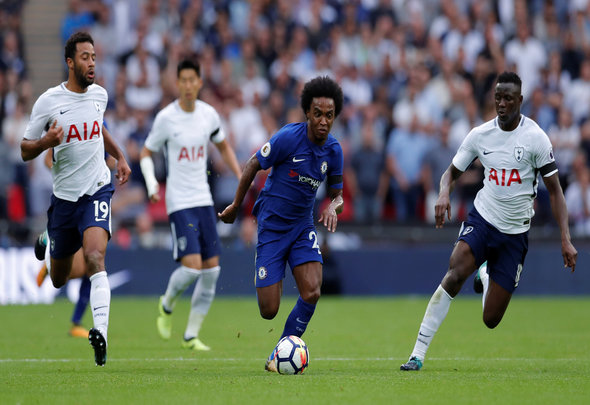 Since Neymar left Barcelona for Paris Saint-Germain the La Liga side have been looking for a successor and Chelsea star Willian is their next target, according to a report.

France Football has revealed that the Nou Camp bosses are eyeing up the 29-year-old as Neymar’s replacement and are ready to swoop on the star.

The French report claims that the Spanish giants are in discussions with the Brazil international in the hopes of enticing him to the club.

It is understood that Barca were initially working hard to bring Borussia Dortmund’s Ousmane Dembele and Philippe Coutinho from Liverpool, but the deals were complicated and now look unlikely to go through.

Because of the difficultly with previous negotiations it’s thought that they have turned their head towards the Premier League champions and their star winger.

Willian moved to Stamford Bridge from Russian outfit Anzhi back in 2013 for a fee close to £32million and has been a huge hit at the club.

Since joining the London side the winger has made 184 appearances across all competitions were he scored 31 goals and provided 28 assists.

It’s unsurprising that Barcelona are interested in Willian as the winger has won two Premier League titles with the Blues, after winning one with boss Antonio Conte last season in addition to lifting the trophy in 2015 under Jose Mourinho. He hold experience of playing in the top competitions and while he may not be an exact replacement for Neymar, he would certainly deliver the experience and talent which the Nou Camp side have lost since waving goodbye to their attacker. While it would be a bonus for Willian and Barca, a move would be a big blow for Chelsea. Conte has already made it clear over the transfer window that he hasn’t been happy with business, and losing the winger could be very costly in the Blues’ chances of retaining the title.

In other Chelsea transfer news, the club are set to table a fresh offer for their top summer target after having a number of rejections from the Premier League club.