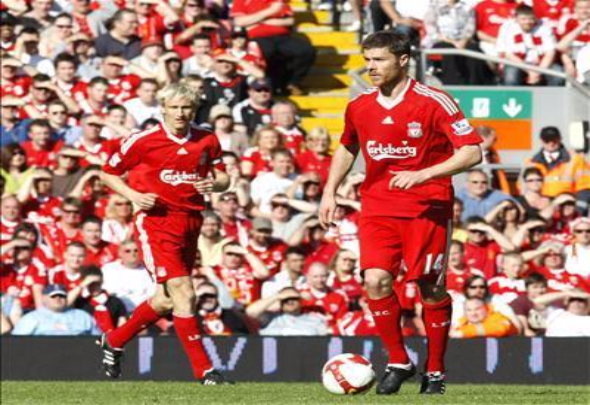 Xabi Alonso has hailed the arrival of Liverpool manager, Jurgen Klopp as a huge boost for the club and the city of his former team.

The Bayern Munich midfielder lined-up against Klopp’s Borussia Dortmund side on a number of occasions but praised his club’s former rival for his impact since joining Liverpool in October 2015.

The 34 year-old is considered to be one of Liverpool’s greatest Premier League players and since his departure in 2008, the Reds have struggled to recapture the success they enjoyed under Rafa Benitez.

However, Alonso believes Klopp has the ambition and hunger to drive Liverpool to success and the club made a fantanstic appointment a year ago.

“It was a big boost for the city and the club to have such a prestigious manager wanting to manage Liverpool,” Alonso told the BBC, as reported by the Liverpool Echo.

“He [Klopp] has embraces the culture of Liverpool, the tradition but also the hunger to deliver and to do something important.

“They are so, so enjoyable to watch and they are [involved] in great games. They have beaten Arsenal in London and Chelsea as well,” he added.

Liverpool are currently in third position in the league, level on points with Arsenal and Manchester City and have made an impressive start to the season.

They are also through to the quarter-finals of the EFL Cup after securing a 2-0 victory against Tottenham on Tuesday evening.

Klopp’s side next face Crystal Palace in the Premier League in Saturday evening’s late kick-off.

In other Liverpool news, this midfielder was pictured playing for quarter-final cup opponents, Leeds almost 13 years ago.