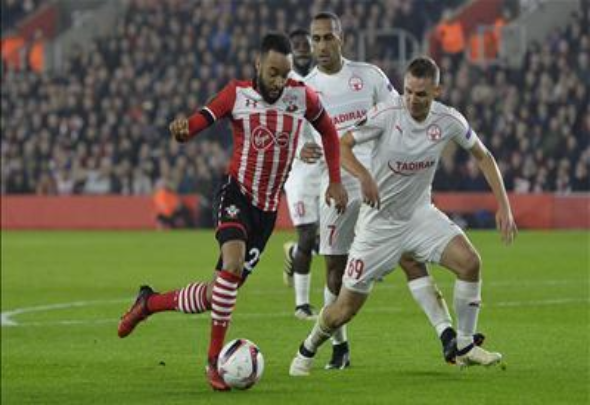 Nathan Redmond is a shock omission from the Southampton team for their Premier League clash against Chelsea on Tuesday night.

BBC Radio Solent sports editor Adam Blackmore suggested on Twitter that the forward had been axed due to a blazing row with manager Claude Puel.

Blackmore reacted to the announcement of Redmond’s omission by claiming on his personal Twitter account that “either Redmond’s had one of his spats with Puel or he’s not trained because of injury”.

Either Redmond’s had one of his spats with Puel or he’s not trained coz of injury.
His partnership with Bertrand will be missed #saintsfc

Redmond has been a mainstay of the Southampton side that are ninth in the league heading into Tuesday’s clash at Stamford Bridge against the league leaders.

He has started 28 of the Saints’ 31 league fixtures this season, scoring six goals and supplying one assist.

Former Norwich wide forward Redmond has been replaced in the Southampton front three by Sofiane Boufal, who has made little impact since joining from Lille last summer.

Tottenham fans will be hoping Southampton can prevent Chelsea securing the three points on Tuesday night.

The 2015 Premier League champions will pull seven points clear, for at least 24 hours, if they beat Southampton at Stamford Bridge.

Spurs travel to Crystal Palace on Wednesday night aiming to bounce back from their 4-2 FA Cup semi-final defeat at the hands of the Blues.

In other Tottenham transfer news, this trio have snubbed mega-money transfer elsewhere to sign for Spurs.