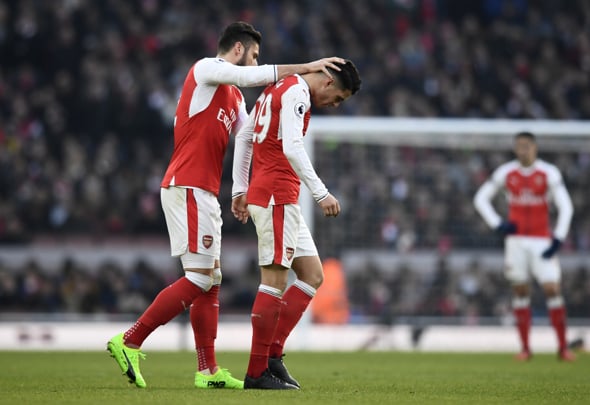 Danny Murphy believes Granit Xhaka is becoming a hindrance to Arsenal after his red card against Burnley on Sunday.

The 24-year-old received his marching orders for the third time this season for both club and country, after a lunge on Steven Defour during the 2-1 win at the Emirates Stadium.

Speaking on BBC’s Match of the Day 2 on Sunday, Murphy condemned Xhaka as a liability to his side as they lumbered towards three Premier League points with a 98th-minute winner.

“He needs to learn,” Murphy declared. “He’s developed a sort of scissor tackle, and it’s getting to the point where he is becoming a liability to the team.

“His stats are awful. I feel sorry for him, but he needs to sort it out and a senior member of the team needs to have a word with him.”

Xhaka’s red card against Sean Dyche’s side sees him pick up his sixth sending off in 76 appearances for the Gunners, Switzerland and former side Borussia Monchengladbach.

As well as receiving 16 yellow cards in that time, former Liverpool midfielder Murphy believes a change in approach is needed for the £35million summer signing.

Arsenal finally took the lead just before the hour mark, with a well-placed header from fellow summer signing Shkodran Mustafi.

However, Andre Gray looked to have secured a point for the away side in the 93rd minute with a penalty, before Alexis Sanchez broke Burnley hearts with a penalty deep into injury time.

Xhaka will now miss the FA Cup fourth-round clash against Southampton on Saturday, as well as Premier League matches against Watford, Hull and bitter rivals Chelsea.

In other Arsenal news, the Gunners have had this Champions League star scouted.